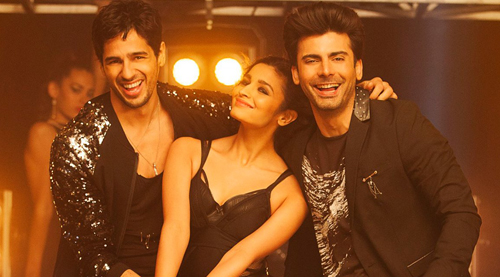 I have great hopes pinned on Kapoor & Sons. The trailer indicates a family film with a different spin, and a cast which is good looking and cool, a sort of Sooraj

Barjatya situation put on its head.

But the two dance numbers, first 'Kar Gayi Chul' (whatever!) and now 'Let's Nacho' left me underwhelmed, to say the least. What on earth is this endearing trio of Siddharth Malhotra,

Alia Bhatt and Fawad Khan doing in this number! Are they trying to induce slumber?

lives of a bus-full of children taken hostage by a terror outfit.

Hothon pe aisi baat moving from the honth to the legs and skipping the beats. None of the three is really having fun mouthing Badashah's beat-driven babble. Strangely Fawad who is known to be very

Malhotra whose forte is clearly not grooving to some hackneyed club beats. Alia when put in adult situations (like dancing to juvenile beats between two gyrating men) always look like an underage

pixie all dressed up in Mama's high heels and lipstick.

The song is a crashing bore. And I do mean crashing because it just makes a virtue of rhythms that seem to cascade from some nursery-rhyme space straight into a club filled with humid hijinks and

There is just one designedly caught-offguard moment which I liked. It comes at the end when Fawad pretends to do his own thing after the choreography is over and Sidharth pretends to disapprove.

And we pretend to be entertained.