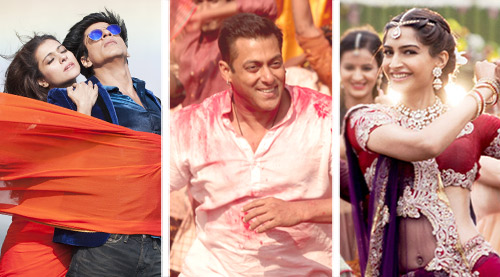 As the industry gears up for the award season, it's time to announce the results of the Bollywood Hungama Surfers Choice Music Awards 2015. While most of you are eagerly

wondering whether your favourite nominee made it to the final list, we would like to inform you that the winners have been selected based on the number of votes acquired by each of the contenders.

Besides, in order to ensure zero spamming and nullify multiple votes, we made the voting system go through a fool-proof 2-step process of Cookie Check and IP check.

So sans much ado, here are the winners:

Towards the end of 2015 we saw the release of the much talked about and highly anticipated Shah Rukh Khan - Kajol starrer Dilwale that also features Varun Dhawan and Kriti Sanon. While the

film didn't quite live up to expectations at the box office, the music of the film composed by Amar Mohile with songs composed by Pritam Chakraborty and lyrics written by Amitabh Bhattacharya did

leave us mesmerized. Hence it comes as no surprise with the track 'Gerua' being voted as the Best Song of the year.

It certainly seems like the best part about Dilwale was the music of the film, with the soundtrack of the move being voted as the Best Soundtrack of the year leading the voting with a

massive margin. Coming in second and third place respectively is the soundtrack of the films Prem Ratan Dhan Payo and Bajrangi Bhaijaan, which incidentally are both by films that

Taking the second slot this year is Shreya Ghoshal for the track 'Deewani Mastani' from the Ranveer Singh, Deepika Padukone and Priyanka Chopra starrer Bajirao Mastani, while coming

in third is Antara Mitra for 'Gerua' from Dilwale.

Though he started off his career in 2011 crooning the track 'Phir Mohabbat' in the film Murder 2, Arijit Singh shot to fame for his rendition of the track 'Tum Hi Ho' from the

2013 release Aashiqui 2. This year Arijit emerges as the Best Male Playback singer for his rendition of 'Gerua' from Dilwale.

Coming in second is none other than actor Salman Khan who lent his voice and support to the film Hero that marked the debut of Sooraj Pancholi and Aathiya Shetty, for his rendition of the

Winning the award for the Best Lyricist and clocking yet another win for Team Dilwale is Amitabh Bhattacharya for his composition of 'Gerua'. Rashmi Singh comes in second for his

rendition of the title track of Hamaari Adhuri Kahaani while Irshad Kamil comes in third with his composition of 'Jalte Diye' from Prem Ratan Dhan Payo.

A song or rather any song does not just rely on visuals that entertain and lyrics that captivate, but what plays an integral part in bringing a song to life is its choreography. This year winning

the award for Best Choreographed song was 'Gerua' choreographed by Farah Khan from Dilwale. Runners up in this category were Shabina Khan for the title track of the film Prem Ratan

In Bollywood entertainment is the name of the game, and doing just that are most of the movers and shakers in the industry who have been featuring in music videos. This year winning the award for

the Best Music Video is the track 'Selfie' from the film Bajrangi Bhaijaan.

While following suit was 'Gulaabo' from Shandaar and 'Afghan Jalebi' from Phantom.