Sara Ali Khan and Kartik Aaryan have earned a huge fan base for themselves individually. Some of these fans are also rooting for the actors to date each other after Sara confessed on Karan Johar’s chat show Koffee With Karan 6 that she would like to date Kartik. And yes the fans will finally get to see them together in Imtiaz Ali's next directorial, Love Aaj Kal 2. While the release date of the film is yet to be revealed, the shooting for the film began earlier this month. 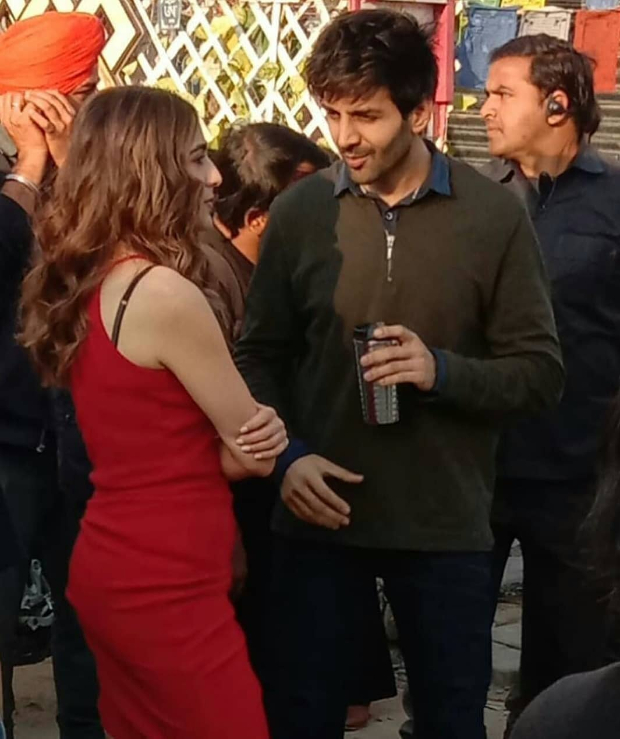 After the leaked video of the kissing scenes of Kartik Aaryan and Sara Ali Khan went viral on social media, another picture from the sets of Love Aaj Kal 2 has surfaced on the Internet. In the picture, Kartik and Sara are seen engrossed in a conversation with intense expressions on their faces. Sara seems like a fashion-forward girl in the film as she is rocking a red dress with soft curls and silver bellies.

In a couple of leaked videos, the actress is seen in a white crop top and yellow high waist shorts while filming her scenes. In another video, the actress is sporting a dungaree paired up with white t-shirt and sneakers.

Just a week ago, the two of them were seen spotted on the sets of Love Aaj Kal 2 while filming intimate scenes. They were seen locking lips and it looked like a set of a club.