Sushant Singh Rajput not only gained popularity as an actor on television but also as a dancer after he participated in reality shows. And now, he was super thrilled to collaborate with the award winning choreographer in Bollywood, Farah Khan. This is for his next, Kizie Aur Manny which marks the directorial debut of casting director Mukesh Chabbra. 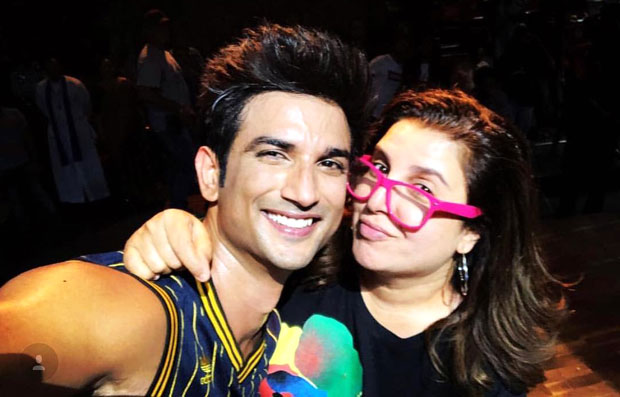 It is a known fact that Kizie Aur Manny, which is the adaptation of John Green’s 2012 novel The Fault In Our Stars, has gone on floor in Jamshedpur last month. And it seems that the makers started shooting the first dance number in the film now. It has been choreographed by Farah Khan and speaking on the same, Sushant took to Instagram to express his happiness. He shared this picture with the choreographer-filmmaker and said, “I am honoured and how, my first with The #FarahKhan in a film, and finally as an actor Thank you so much ma’am, today is such a special day”

Going further, reports have it that Farah Khan was actually fulfilling a promise that she had made to Mukesh Chabbra quite some time back. It seems that the choreographer turned filmmaker, who has known Mukesh for many years, had told him that she would choreograph for his debut directorial. Incidentally, Khan kept her word and fulfilled the same in Kizie Aur Manny.

We also hear that the song was wrapped up quickly. After a two day rehearsal, the song was reportedly wrapped up in two hours. In fact, the last take was completed in one shot itself. Farah stated in reports that she was able to wrap the dance number quickly also because Sushant is a great dancer.

Coming back to the film Kizie Aur Manny, it is produced by Fox Star Studios and also stars newbie Sanjana Sanghi.

Also Read: The Fault In Our Stars remake: Here’s the FIRST glimpse of Sushant Singh Rajput and Sanjana Sanghi from the sets of Kizie Aur Manny