Not too long ago we reported that the film Kizie Aur Manny, the remake of the blockbuster Hollywood romantic drama The Fault In Our Stars, has gone on floor in Jamshedpur. The film stars Sushant Singh Rajput and Sanjana Sanghi as Kizie and Manny respectively and now recently we got a glimpse of their looks from the Mukesh Chhabra directorial. 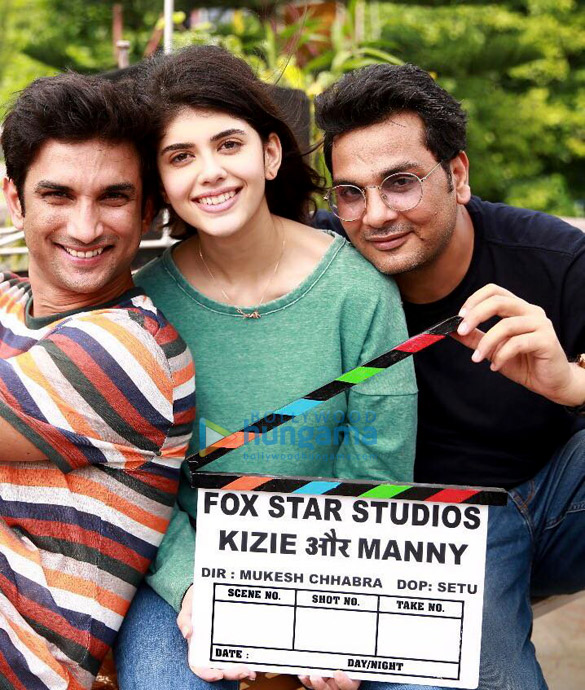 Kizie Aur Manny marks the directorial debut of Mukesh Chhabra, who is a renowned casting director. The director had earlier reasoned that the versatility and cosmopolitan crowd of Jamshedpur had inspired him to take up Jamshedpur as the location for the film. And now, the film has gone on floor in the said location and here’s the first glimpse of the same.

The picture from the sets features Sanjana Sanghi and Sushant Singh Rajput from the film. If the said on the sets image is anything to go by, it seems that the characters of Kizie and Manny look quite simple and the attires sported by the lead couple too is quite casual. Interestingly, an earlier report revealed that one of the first scenes that were shot for the film was about Kizie and her onscreen family.

He had also mentioned that The Fault In Our Stars, that has been adapted as per Indian sensibilities, will be presented in a lighter manner in the Hindi version. There is also an interesting story behind the name Kizie. Mukesh Chhabra had earlier suggested in reports that the name, which actually doesn’t sound Indian, was imported from Africa.

Produced by Fox Star Studios, the makers had earlier released a poster of Kizie Aur Manny wherein Sushant was seen wearing the mask of Rajinikanth. The release date of this film is yet to be announced.  As for the 2014 Hollywood film, The Fault In Our Stars, it was an adaptation of the book by the same name written by John Green.