NOTE: As a mark of respect to the deceased lead actor Sushant Singh Rajput, Bollywood Hungama has decided NOT to assign any star rating to this movie review

The untimely demise of Sushant Singh Rajput has left a void in the lives of millions across the country. And around 40 days after his demise, his last film DIL BECHARA released today on Disney+ Hotstar. In a heartening gesture, the streaming giant has made the film available for free for everyone. So does Sushant’s swan song manage to tug at the heartstrings of the viewers? Let’s analyse. 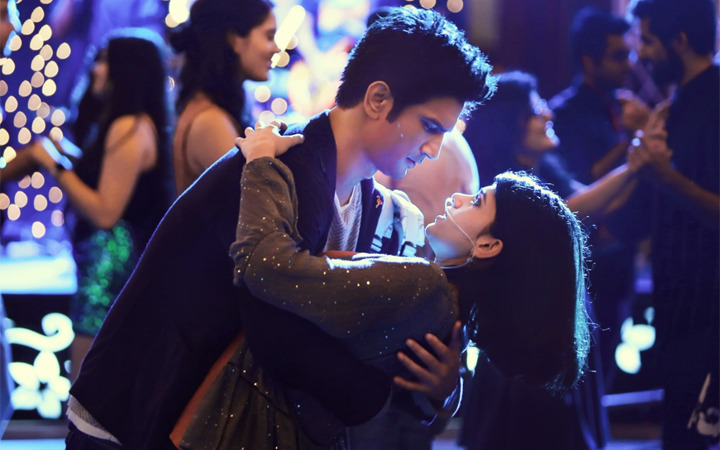 DIL BECHARA is the love story of terminally ill youngsters. Kizie Basu (Sanjana Sanghi) has shifted from Zambia to Jamshedpur along with her parents (Saswata Chatterjee and Swastika Mukherjee). Her life has turned upside down as she has been diagnosed with thyroid cancer. This requires her to wear a pipe around her nose and carry an oxygen cylinder 24x7. One day, in her college, she bumps into Manny (Sushant Singh Rajput). She finds him to be loud and arrogant. But later, she realizes that even he’s suffering from a cancer (osteosarcoma) due to which one of his legs had to be amputated. Yet, he lives life to the fullest and this makes Kizie fond of Manny even more. As they start to spend time with each other, she confesses to him that she loves the 'Main Tumhara' album of a musician named Abhimanyu Veer (Saif Ali Khan). Manny listens to the songs reluctantly but soon becomes a fan. However, he finds the title track incomplete. Kizie agrees and expresses that she wishes to meet him once. Manny realizes how much meeting Abhimanyu Veer will mean to Kizie. Hence, he finds Abhimanyu’s email address and arranges their meeting with him in Paris, where Abhimanyu resides. Kizie’s parents are aghast with her plans to fly in this condition. However, they soon get convinced and Kizie’s mother also decides to join Kizie and Manny in their Paris trip. Manny books the tickets as well but few days before the trip, Kizie’s health deteriorates and she has to be hospitalized. What happens next forms the rest of the film.

DIL BECHARA is the official remake of the 2014 Hollywood love saga THE FAULT IN OUR STARS. Suprotim Sengupta's adapted story is simple, neat and uncomplicated. Suprotim Sengupta's adapted screenplay is entertaining and the characters and their journeys are well fleshed out. Shashank Khaitan's adapted dialogues are witty and conversational and also have the ‘filmy’ touch for Manny’s scenes. And in Abhimanyu Veer’s scenes, the lines are acidic.

Mukesh Chhabra's direction is decent, considering that this is his debut film. He deserves brownie points as he makes viewers fall in love with the characters seamlessly. However, the film does drop in the second half, after the Paris episode. But this is a minor complaint and it picks up yet again in the climax that is sure to tear you up and make you grab the tissue box.

DIL BECHARA is just 1 hour 41 minutes long and doesn’t waste time. From the first scene, the focus is on the characters and the cancer factor. The first 8-10 minutes are fine but the film gets better as Kizie and Manny get introduced. Manny’s character is quite funny and it adds a lot to the entertainment quotient. The other two scenes that particularly work are Kizie and Manny going to the ‘serial killer-serial kisser’ spot and the scene where Manny meets Kizie’s family while watching the National Geographic channel. In the second half, scene involving Manny and Kizie’s father touches the heart. The Paris episode is unexpected but has its share of lovely moments. The finale however is heart-breaking. Moreover, parallels can be drawn with reel life and the loss of Sushant in real to the sequence where Kizie gives Manny a preview of the funeral speech and also in the final scene.

DIL BECHARA belongs to Sushant Singh Rajput not just because he’s no more but also because he’s on another level in the film. His character is very well written and he adds his charm. He’s sure to make you laugh a lot in the scenes where he’s pretending to be goofy and sweet and he’s sure to make you cry buckets of water in the finale. For many of his fans, this will be a difficult watch. Sanjana Sanghi is excellent as her first role as a female lead. She also maintains her strong position and leaves a mark in several sequences particularly in the confrontational sequences and the finale. Saswata Chatterjee is adorable. Swastika Mukherjee is too good and suits the part. Her change of heart towards Manny, however, does seem a little unconvincing. Sahil Vaid (J P) is dependable as always. Saif Ali Khan is quite cool in the cameo. Subhlaxmi (Manny’s Nani) is sweet and one wishes she had more screen time as it would have been interesting to know Manny’s relationship with her. Sunit Tandon (Dr Jha) is decent. Michael Muthu (Manny’s father) and Rajie Vijay Sarathy (Manny’s mothe) get no scope. Durgesh Kumar (Rickshaw puller) is fine.

A R Rahman's music is in sync with the film and its many moods. The title song is the best of the lot and that it’s shot in one take makes it even more special. 'Main Tumhara' is an important song of the film and is sure to linger in one’s mind. 'Taare Ginn' is beautifully composed and shot. 'Afreeda' is played just for a minute but has a catchy feel. 'Maskhari', 'Khulke Jeene Ka' and 'Mera Naam Kizie' are also good. A R Rahman's background score is better and elevates impact.

Setu's cinematography is splendid and captures Jamshedpur and Paris with panache. Amit Ray and Subrata Chakraborty's production design is appealing. Watch out for the abandoned dump yard by the lake – it gives a nice touch to the narrative! Natascha Charak and Nikita Raheja Mohanty's costumes are visually pleasing. Aarif Sheikh's editing is without complaints.

On the whole, DIL BECHARA has strong emotions and hype as its trump card - a fact that goes in its favour completely. It will make you tear up and grab the tissue box atleast once. For lovers of Hindi cinema and fans of Sushant Singh Rajput, say 'YES' to Dil Bechara.

NOTE: As a mark of respect to the deceased lead actor Sushant Singh Rajput, Bollywood Hungama has decided NOT to assign any star rating to this movie review

One year of Dil Bechara: Sanjana Sanghi shares unseen pictures from the sets of the film along with a heartfelt note

Dil Bechara, Soorarai Pottru, Tanhaji, Sadak 2, Laxmii among the most searched films on Google in 2020 in India