Bollywood dad Karan Johar has shared a fresh video of his son Yash making a sandwich. In the video, Yash is seen on a video call with his classmates and teachers where he is showcasing his culinary skills. 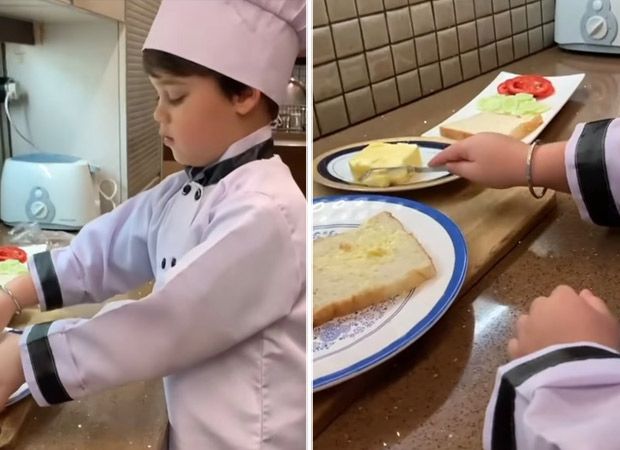 Sharing the video, Karan wrote, “We have a chef in the house! Chef Yash Johar!” Karan's fans loved this tiny glimpse of his son and many called the video cute and adorable. Sophie Choudry wrote, “Cutest chef I ever saw.” Manish Malhotra wrote, “Look at him.”

Yash wore a white chef's coat and hat. He prepared a cucumber and tomato sandwich with a thick spread of butter. A classmate even asked him to bring the dish closer to the camera so everyone could have a better glance at it.

A fan wrote, “Karan you better eat the butter-laden sandwich made by this adorable Michelin chef on your return… will just cost you a zillion calories.” Another one wrote, “So much butter…The Punjabi in me loves him.”

Karan used to share almost daily videos of his kids--Yash and daughter Roohi--before abruptly stopping last year in June. He was dug through on social media after the death of actor Sushant Singh Rajput, post which he took an extended break from social media.

Karan previously shared a picture with his whole family on Diwali. “Happy Diwali and all our love to all of you …. May the season bring you all the love, laughter, good health and peace of mind... have a blessed new year,” he wrote with a picture of them attired for the festival.

Roohi and Yash were born in 2017 via a surrogate. Roohi's name is an anagram of the name of Karan's mother Hiroo Johar while Yash is named after his father, late filmmaker Yash Johar.