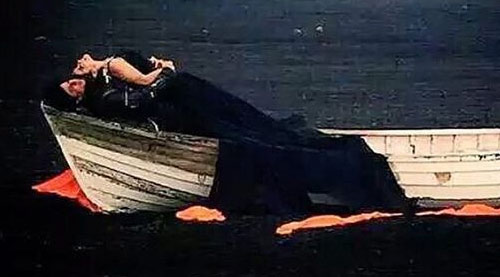 If there is one movie which all the cinegoers are waiting with bated breath, then, it has to be none other than Rohit Shetty's Dilwale. There are reasons aplenty for the
same.

While on one hand, it stars the 'tried-and-tested' smash hit pairing of the eternal superstar Shah Rukh Khan and the firebrand actress Kajol, on the other hand, the film is being made by the 'hit machine' Rohit Shetty. The film also stars the fresh pairing of Gen Next stars Varun Dhawan and Kriti Sanon.

While there have been many images that have been doing the rounds of the film, Kajol took to Instagram and posted 'yet another image' of the film that has her and Shah Rukh Khan on a boat and aptly titled the same as "Another one from #Dilwale get ready for this #Dec18". Needless to say that, the resultant is sheer magic!

Produced by Red Chillies Entertainment in association with Rohit Shetty Productions, the film that went on floor on March 20 in Mumbai is looking for a Christmas (December 18 to be precise) release this year.