Janhvi Kapoor turned 21 yesterday and it was one of the most bittersweet moments for her. While she is on the cusp of superstardom as her debut movie Dhadak is just about to release, a terrible tragedy has struck her with her mom Sridevi passing away suddenly. Yesterday, she spent her day at an orphanage continuing her mom Sridevi’s legacy and later in the evening, her cousins Sonam Kapoor, Rhea Kapoor, Anshula Kapoor and Shanaya Kapoor made it to her house with cakes, candles and lots of good wishes. Father Boney and little sister Khushi were in attendance too. 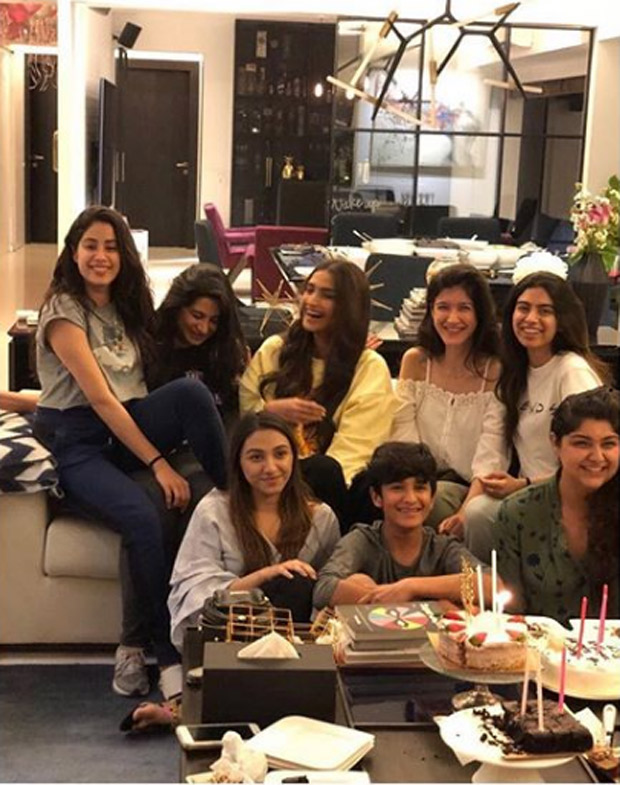 We all know that Boney and Sridevi’s marriage was one of the most controversial unions in Bollywood as the filmmaker was already married with kids Arjun and Anshula. For many years Janhvi and Khushi were a little distant to Boney’s family but this tragedy has brought the entire family together. Rhea who shares her birthday with Janhvi made sure that she is not left alone and gets family support on her D-Day. Sonam shared a heart-warming picture of the gang captioning it as ‘Kapoors and Daughters’.

Just a couple of days, Janhvi opened up about her mother’s death and wrote a rather heart-breaking post on the net. She wrote: On my birthday, the only thing I ask of all of you is that you love your parents. Cherish them and devote yourself to making them feel that love. They have made you. And I ask that you remember my mother fondly, pray for her soul to rest in peace

She further wrote, “Me and Khushi have lost our mother but papa has lost his “Jaan”. She was so much more than just an actor or a mother or a wife. She was the ultimate and the best in all these roles. It mattered a great deal to her to give love and to get love. For people to be good and gracious and kind. She didn’t understand frustration or malice or jealousy. So let’s be that. Let’s be full of only good and give only love. That would make her happy, to know that even in death, she gave you all something. The courage and inspiration to fill yourselves with nothing but love and rid yourselves of bitterness in any way and form. That’s what she stood for. Dignity, strength and innocence. “

Check out her birthday videos and pic down below.

Their family is with them. They’re all together. Nothing could make me happier today than their smiles. ❤️ @janhvikapoor @khushi05k @anshulakapoor @jahaankapoor26