Music has always been an integral part of films, with tracks releasing before the film to help promote the feature and build hype, music has been a key advantage. Interestingly though, it isn’t film songs that always rule the charts, in fact, in the recent past singles featuring known Bollywood celebrities have been doing well. In this special report we take a look at the Top 10 Songs of 2021. 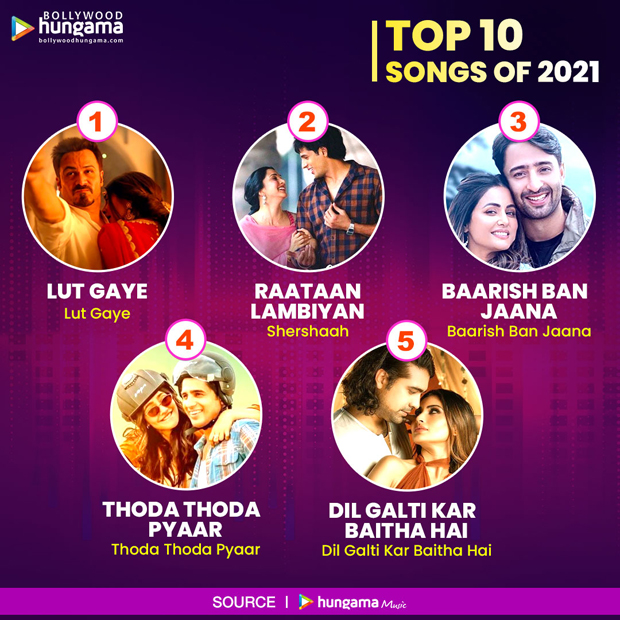 Infographic: From Lut Gaye to Shershaah to Paani Paani here are the Top 10 songs of 2021

Raataan Lambiyan: Coming in second was the track ‘Raataan Lambiyaan’ on Sony Music from the film Shershaah. Featuring the lead actors, Sidharth Malhotra and Kiara Advani, the track fast became a rage. Penned by Tanishk Bagchi, with Jubin Nautiyal and Asees Kaur on vocals, the track fast took on a life of its own post release.

Baarish Ban Jaana: Another single to make it to the top is VYRL Originals’ ‘Baarish Ban Jaana’ sung by Payal Dev & Stebin Ben the track brings together televisions most adored stars - Hina Khan and Shaheer Sheikh. Composed by Payal Dev, and written by Kunaal Vermaa the said music video was shot by Aditya Datt in Kashmir.

Thoda Thoda Pyaar: Yet another single making it to the Top 5 is Zee Music Company’s ‘Thoda Thoda Pyaar’, sung by Stebin Ben with lyrics from Kumaar the single featuring Sidharth Malhotra and Neha Sharma was compose by Nilesh Ahuja.

Interestingly, in the Top 5 track of 2021, four have turned out to be singles, with T-Series featuring two songs in the list. 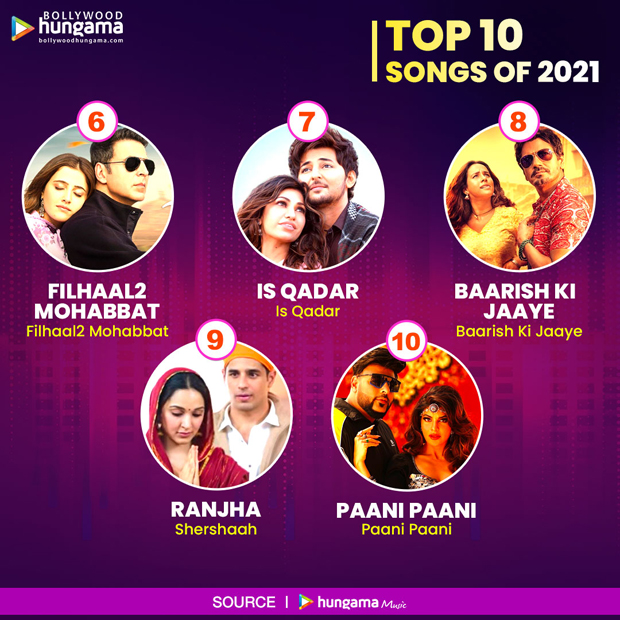 Is Qadar: Tulsi Kumar and Darshan Raval’s romantic song ‘Is Qadar’ makes it to number 7 on the list. Directed by directed by Sachet-Parampara, with lyrics by Sayeed Quadri, the T-Series track is directed by Arvindr Khaira.

Baarish Ki Jaaye: Apparently based on a true story is DM music’s single ‘Baarish Ki Jaaye’. Featuring Nawazuddin Siddiqui and Sunandha Sharma with B Praak on vocals and Jaani on lyrics and composition, the rack take the 8th spot.

Ranjha: Yet another film track making it the list of Top 10 is ‘Ranjha’ once again from the Sidharth Malhotra – Kiara Advani starrer Shershaah. Sung by B Praak and Jasleen Royal, and composed by Jasleen Royal. The T-Series’ song is penned by Anvita Dutt.

Paani Paani: Taking the 10th spot on the list is Saregama Music's Badshah dute with Aastha Gill ‘Paani Paani’ featuring Jacqueline Fernandez along with the vocalists in the video, the track fast became a rage.

Like the Top 5, the Top 10 list also includes mostly singles T-Series and DM featuring two tracks each in the bottom 5.