The recently released Allu Arjun starrer Pushpa: The Rise – Part 1 has been raking in the moolah each passing day. After a sluggish start the business of the film stunned the industry as it surged ahead by leaps and bounds. In light of the stunning success Pushpa enjoyed Bollywood Hungama takes a look at some of the South film whose Hindi dubbed version managed to make a big impact on the Indian box office. 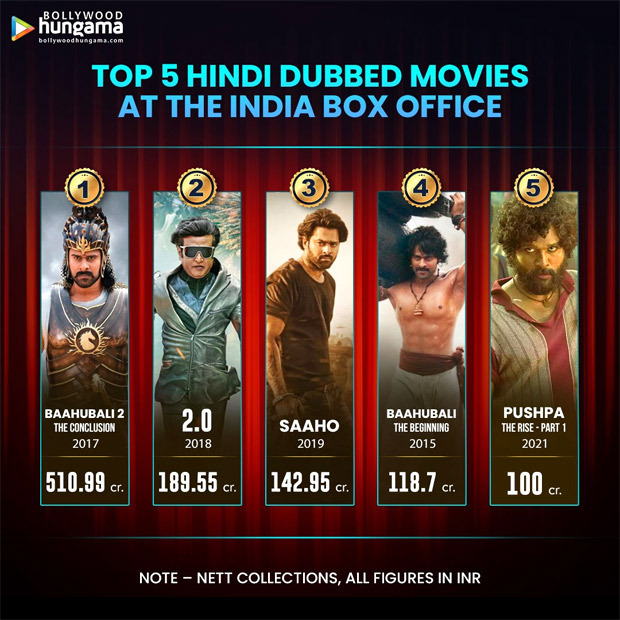 Infographic: Baahubali 2 to Pushpa – Here are the Top 5 Hindi dubbed South films that have made it big at the India box office

2.0: The Rajinikanth – Akshay Kumar starrer 2.0 takes the second spot on the list. Collecting Rs. 189.55 cr. this 2018 released proved that fan following can propel a film at the box office.

Bahubali – The Beginning: The S S Rajamouli directorial that kick started a trend of epic films was Bahubali – The Beginning. The 2015 which was made on a unheard of scale managed not only to recover its investment but also develop a fan following. Drawing in Rs. 118.7 cr., Bahubali 1 set the stage and expectations for the record breaking second part.

Pushpa: The Rise – Part 1: The latest Hindi dubbed South film that hit screens in December 2021, managed to cross the Rs. 100 cr. mark despite the competition. A dark horse at the box office, Pushpa: The Rise has continued to do business in theatres despite its OTT release. Proving that in today’s day and age repeat audience is possible if the film provides for an experience.

Also Read: Infographic: From Lut Gaye to Shershaah to Paani Paani here are the Top 10 songs of 2021