Aanand L Rai directed film Zero starring Shah Rukh Khan built the largest set in Film City, Mumbai ever as they recreated the Ghantaghar or clocktower which is an iconic landmark of Meerut. As Zero is based in the city of Meerut, the makers recreated the monument to the scale, making it the biggest set ever built in film city. The original structure is located in Meerut, the center of Uttar Pradesh and was built in 1914 by the British. Replicating the magnificent commemorate which was built by skilled laborers with specialized techniques back in the 19th century was a very challenging and a grueling task for the director. 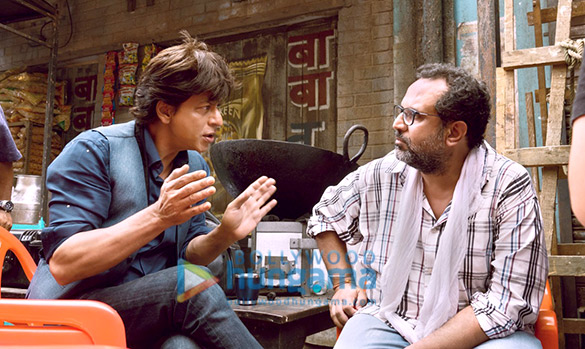 The set has been so well duplicated that the difference between real and the set is almost impossible to be told. From the local stalls to the massive buildings, the makers recreated everything to make it look authentic.

A source close to the film reveals, "During the pre-production, we had traveled to Meerut and clicked pictures of the lanes to recreate them. As we built the set in Mumbai, we clicked a picture again to compare the two and to our surprise, it was even difficult for the production team to spot the difference." The trailer gave us glimpses of the recreated town, leaving no room for doubts to the original Meerut.

Zero showcases Shah Rukh Khan as the vertically challenged Bauua Singh, Anushka Sharma as Aafia, a girl who is a scientist living with cerebral palsy and Katrina Kaif as a Bollywood Superstar named Babita Kumari. The trailer of the film has piqued the interest of the audience making the Zero one of the most anticipated movies of the year.

Also Read: Aanand Rai’s got a plan to win over kids in Zero with Anushka Sharma!