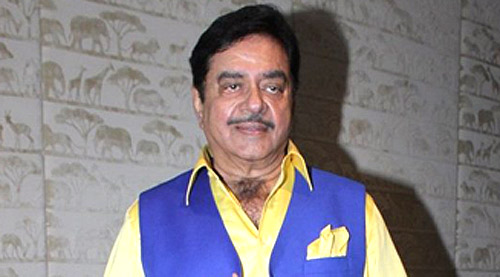 Bharathi, you've also spoken about the Gharwali and Baharwali element in the biography. So could you tell us something about that? He has been very candid about that.
Bharathi:
He has been very candid because it's an open chapter everybody knew about it. It wasn't done under wraps at all, and I think there was a time when he was in a fix. Because I was friend to both him and to Poonam and to Reena. So I knew what was being played out between all of them and I could see he was in a fix at that time, he didn't know which way to head. Then finally I guess better sense prevailed and he knew where to go. It has all worked out so beautifully that I think it's not very nice to keep revisiting that all the time. But yes he has revisited it only to that extent that it's not something that needs to be whitewashed.

Sir, last question, apparently I think you've also you've mentioned that you were approached for Jai in
Sholay but Mr. Bachchan convinced the producer that he's better for the role. Could you please talk about that?

But you had, Kaala Pathhar ke time pe difference jo aap log the, many would say at a point of time it came from a personal space as well. You had a bit of cold war for few years.
SS: Ab isko aap kaho jawaani ka josh, stardom ka apna...