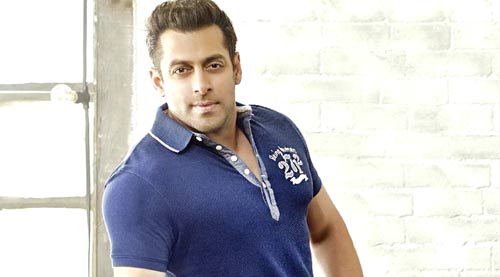 "The extra interest in Bajrangi Bhaijaan is because of my buddies Shahrukh and Aamir," said Salman Khan at the theatrical trailer launch of 'Bajrangi Bhaijaan' in Mumbai today. "Both Shahrukh and Aamir launched the 'Bajrangi Bhaijaan' trailer on twitter. Very sweet of them. I loved it," Khan added. This is the first media interaction that Salman had been a part of post the tempestuous verdict in the hit and run case and the subsequent quashing of the jail sentence. He looked extremely at ease, was very relaxed and had fun playing around with the mostly-silly-questions asked by several upstart and over zealous reporters. On being asked about rumours of Aamir, him and Shahrukh coming together for a movie, Salman said, "We would love to, but the producers can't afford one of us, how will they afford the three of us."


The theatrical trailer of Bajrangi Bhaijaan doesn't showcase the typical Salman Khan heroics or fight sequences that have come to stereotype his last few films. There seems to be a deep emotional content involving Khan and baby Harshali, the Pakistani girl whom Pawan must take back to her motherland. Salman told the media that he didn't use glycerine for the crying sequences as he was extremely moved by the story. "Script is the hero of this film. One of the best scripts that I've ever read," he said. When I asked Khan if this film can aid in improving people to people contact between India and Pakistan amidst political polo games, he said, "that would be a very sensible thing to happen." He said that the film will release in Pakistan.


Kareena Kapoor looked extremely beautiful. She shined brightly in a stunning white dress and one couldn't help but look at the superby toned legs. She will give a complex to any of the upcoming actresses with her extraordinary physical and actingprowess. Kapoor's comfort level with Khan in the Bajrangi Bhaijaan theatrical is very relaxed and sprightly. Nawazuddin doesn't have much to do in the promo except for one scene but hopefully he'd be at his best in the film.


There was a special screening of the Bajrangi Bhaijaan for Salman and Kareena fans after the media event. There was total mayhem as fans rushed to catch a glimpse of their favourite stars. A fan had specially flown in from Bangalore to get a selfie clicked with Salman and Kareena. He created quite an awkward scene. Ideally such big events ought to be better planned. Although howsoever well planned one might be, one can never be totally prepared for euphoria that Salman hurricane causes.