Last Updated 03.10.2022 | 6:15 PM IST
feedback language
follow us on
Bollywood Hungama » News » Bollywood Features News » Is the era of the Khans over? Or will Shah Rukh, Aamir and Salman Khan have to reinvent themselves

The year 2018 has been a rather mixed year for Bollywood. With big ticket mass pullers turning copper while the smaller content driven films excelled proved that over the years the audience has evolved into a smarter lot that seeks value for their money. But the shocker in 2018 was the fact that all three Khans, viz. Shah Rukh Khan, Salman Khan and Aamir Khan did not perform as expected at the box office. Though, while the Salman Khan starrer Race 3 did manage to rake in a bit, the Shah Rukh Khan starrer Zero and the Aamir Khan starrer Thugs of Hindostan totally missed their mark. On the other hand smaller budget films like Sonu Ke Titu Ki Sweety, AndhaDhun, Badhaai Ho, Stree and a few others went on to redefine the formulae of what makes a film a success. Looking at this Bollywood Hungama got in touch with a few names from the world of Bollywood trade to understand what went wrong for the Khans, and whether each of the three big Khans will need to reinvent themselves. 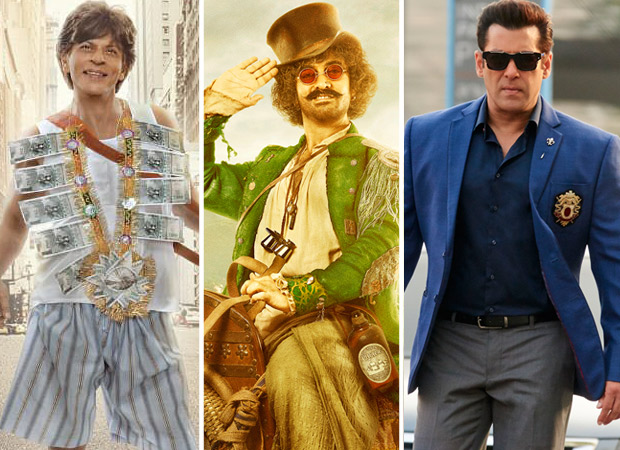 Is the era of the Khans over? Or will Shah Rukh, Aamir and Salman Khan have to reinvent themselves

Starting off prominent film trade analysist Amod Mehra curtly defines the problem Shah Rukh Khan faced with Zero saying that the actor played himself and not the role. “See in Zero, we all saw SRK playing SRK, the same character that we have seen time after time in his films. Now, had he not played himself and instead played the character that was defined in the film, as in a dwarf, things would have been different.” Further talking about Shah Rukh Khan losing his charm Mehra clarifies, “It isn’t that SRK has lost his charm, it is just that he is still doing the same thing repeatedly. Like in Fan, he played a different version of himself, now in Zero; again he played the proverbial romantic hero role. Now this repetition is what is causing the problem. In fact, it is evident that Shah Rukh is looking at doing different cinema and varied genre of films, but he has to understand that he needs to play the character and now be Shah Rukh Khan.”

On the other hand film critic and trade analyst Taran Adarsh says, “First of all, I will still call them the three mighty Khans. Though Race 3 did not live upto the expected numbers, and Zero and Thugs of Hindostan underperformed all three still have it in them to be crowd pullers. It is just a question of one film that can bring back all three into running. I would say that it is always content that gets accepted or rejected by the audience and in these cases it was the content that was rejected. So now given the fact that they are the three mighty Khans, their films come along with big expectations in terms of both content and box office value. Now when one film does not work it is not correct to write them off, each of them enjoy a huge fan following, and all three have the star power to pull in the audience on day one, and then it needs content power to continue pulling in the audience.”

While Taran Adarsh does have an interesting point, that all three SRK, Aamir and Salman enjoy massive fan followings that ensures a grand opening, it is necessary to have good content in films to keep the audience flowing in. Similarly Amod Mehra too makes a valid point when he talks about reinvention and the way forward when he says that each of the three need to understand that there are films where they need to play themselves and there are other films where they need to play the character. “In Race 3, Salman approached the film like any other film he does, he thought he could walk in, do what he does, play himself and walk out a success. Now that worked for a bit and did pull in the fans, but the film did not sustain at the box office. The same goes for Aamir Khan. In Thugs of Hindostan, Aamir decided to break with convention of playing character based roles, and instead play the hero. Now, the audience looks forward to an Aamir film because it will have him playing a character and a not a typical ‘hero’, so Thugs was a let-down because it did not have Aamir the way the audience wanted.”

Though both Amod and Taran have diverging views on the problems the Khans faced this year, both echo a similar sentiment when quizzed whether the ear of the Khans is over. “You cannot say that the era of the Khans is over, it will take just one film for them to regain their position”, says Taran Adarsh. Simultaneously Amod Mehra too adds in, “The Khans will be there, they have the star power, but today we also need content power. But yes we have to acknowledge that the youngsters are gradually edging out the older generation. This year, each of them, the three Khans, had their individual problems, and all three can still bounce back”.

Interestingly, while 2018 has been a rather disastrous year for the three Khans it is obvious that neither Shah Rukh Khan, or Salman Khan nor, Aamir Khan is going anywhere. The three ‘Mighty Khans’ as Taran Adarsh puts it, are here and will remain for a while more. But that does not mean the younger lot will fade, as Amod Mehra says, “Only 2019 will tell what really will happen, the younger lot are here, they know what the audience wants and they are ready to give them that.”