Shahid Kapoor and Mira Rajput recently took some time off for a family holiday with their kids to Switzerland and London. Needless to say, their recent social media posts are reflection of their vacay shenanigans. During this trip, the couple also celebrated seven years of togetherness and posted about it on the platform too. Amidst all the photos and videos, what caught the social media users’ attention is a photo of Shahid Kapoor and Mira Kapoor posing with a train that seems to have reminded fans of the iconic Shah Rukh Khan – Kajol scene from Dilwale Dulhania Le Jayenge. 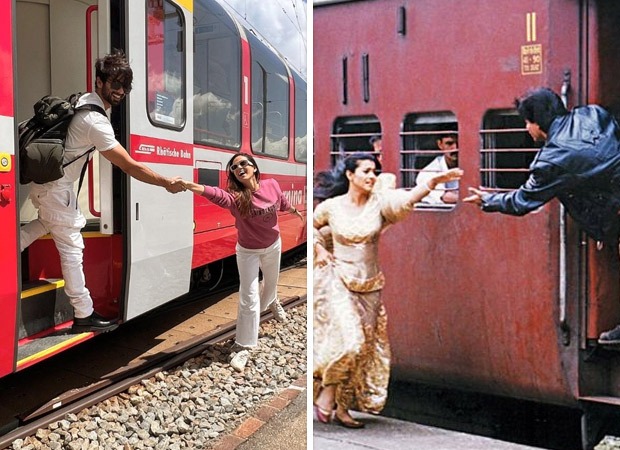 DDLJ in Switzerland once again! Shahid Kapoor and Mira Rajput recreate this iconic scene of Shah Rukh Khan and Kajol

Bollywood buffs will definitely remember the climax of the Aditya Chopra romantic drama Dilwale Dulhania Le Jayenge where Kajol runs with the moving train to hold the hand of Shah Rukh Khan. A photo from the recent Switzerland trip of Shahid Kapoor and Mira Kapoor seems to have taken fans back to the 90s days. The photo features Shahid holding the hand of Mira, where he is already inside the train whereas Mira pretends to catch his hand and jump into the train. The recreation of Dilwale Dulhania Le Jayenge in Switzerland doesn’t seem to be a coincidence since the picturesque country holds equal importance in the film. Moreover, London too is a unique part of DDLJ since the lead characters belong to the England capital in the film. Here, have a look at the post:

Shahid Kapoor and Mira Rajput recently also completed seven year of togetherness. The actor took to Instagram to share this photo of the duo saying, “7 down baby. Happy anni you made it through 7 hard long years. You a survivor. You a LEGEND .. ???”

On the work front, Shahid Kapoor will be making his OTT series debut with Farzi directed by Raj Nidimoru and Krishna DK. The show also stars Vijay Sethupathi, Raashi Khanna, and Kay Kay Menon among others.