Esha Deol is Hema Malini’s eldest one and a total fitness inspiration for many. She is not seen much on screen but she did come on television with Roadies and showcased her fit and fab form to us. Now, she is a proud mommy to her darling daughter Radhya and after months of keeping her baby in wraps, she took to Twitter to finally post an adorable picture of the baby. She took to Twitter and wrote, “Radhya Takhtani ... our darling daughter.” The little munchkin is adorably dressed in a baby pink cute frock with a matching bow tie. She smiles genially at the camera. Thank you Esha for sharing this beautiful moment with us. Radhya is about seven months old and her parents have been understandably protective about her till now. 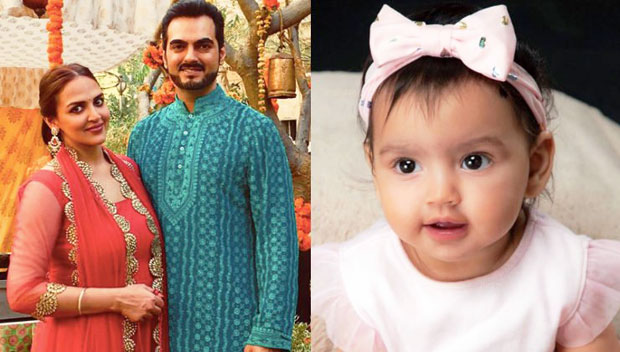 She was born on October 23, 2017 and her dad Bharat Takhtani had stated, “It’s hard to express how happy i feel today! I think the baby looks like me and when she smiles, the world smiles at you. Esha and her bonding is divine.” Esha got married to Bharat in 2012 and since then has spoken about the bond she shares with him and how they have grown together from strength to strength through many years now. Esha had said during her pregnancy that Bharat and she have become as thick as thieves. Since she was pregnant, she was prone to mood swings but he not just tolerated them happily but also was protective about her in every way.

She also further said that he is her best critic, encouraging her in everything she does. She even said that people find it filmy but she would not want to change anything about her marriage because her life is beautiful.