Arjun Kapoor has an array of projects in the pipeline. While the actor is busy with his sister Sonam Kapoor's wedding with Anand Ahuja, he has also begun prep for his next Panipat. The film, helmed by Ashutosh Gowarikar, will be set in the 18th-century era. With Arjun Kapoor, Kriti Sanon and Sanjay Dutt coming together for the mega-scale film, it will be cinematic experience to remember. 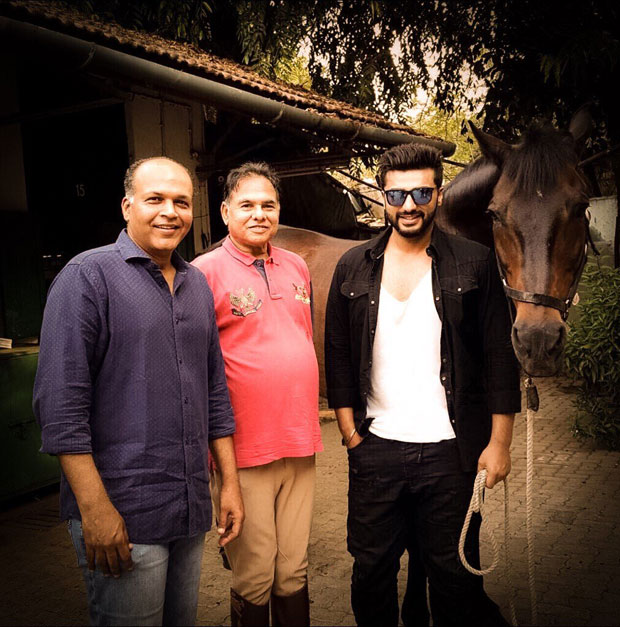 Arjun Kapoor, on Sunday, took to his social media to share a photograph of himself with Panipat director Ashutosh Gowariker. He informed that he began his training with horse riding sessions in Mumbai. "Had quite a Sunday morning, started my horse riding sessions for 'Panipat' today. Thank you to the President of Amateur Riders Club, Suresh Tapuriah, for the guidance and for making me meet this absolute beauty of a horse, Shaka Zulu," he wrote.

The Third Battle of Panipat is one of the most epic battles in the history of India that took place on January 14, 1761, at Panipat. The battle was fought between the northern expeditionary force of the Maratha Empire and invading forces of the King of Afghanistan, Ahmad Shah Abdali, supported by two Indian allies—the Rohilla Afghans of the Doab, and Shuja-ud-Daula, the Nawab of Awadh.

Panipat will be produced by Sunita Gowariker, under their home banner AGPPL in association with Rohit Shelatkar’s production company Vision World. The first poster of the film was released last month. Panipat is slated for a release on December 6, 2019.

Meanwhile, Arjun Kapoor is reuniting with Ishaqzaade co-star Parineeti Chopra in Namaste England. The film has been preponed and will now release during Dussehra 2018. Before that, they will come together for Dibakar Banerjee’s Sandeep Aur Pinky Faraar which is set for August 2018 release.