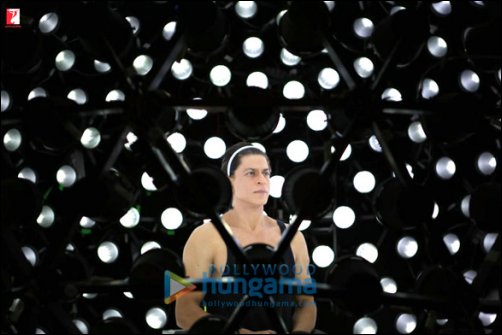 We are aware of the kind of hard work that Shah Rukh Khan puts in for his films and this time around too, the actor doesn't want to leave any stone unturned for his next titled Fan which will be produced by the renowned Yash Raj Films.


Shah Rukh Khan who had recently visited the US, during 'SLAM! The Tour', decided to prepare for his role in Fan during the trip. He took two days out of his busy schedule to fly down to Los Angeles for his digital 3D face scanning for Fan. The actor who will seen in a double role in the film, visited the Counter Punch Studios which is located in the city in order to complete the scanning process and the team was more than happy to lend a helping hand to the superstar. Here's a glimpse of the 3D face scan that Shah Rukh Khan underwent for Fan.

The excited team at Counter Punch was all praises for Shah Rukh Khan's professionalism. They said, "Working with Mr. Shah Rukh Khan was extremely inspiring. Our team had the pleasure to get to meet and work with Mr. Khan when he travelled to Los Angeles for a high fidelity 3D scanning session for his upcoming film. We have worked with many actors in scanning, including several Bollywood mega stars and are constantly surprised by the work ethic and down to earth personalities of such high profile artists. Mr. Khan's professional mannerism, personal approach to all crew members, and skilled facial acting talents were incredible. He was extremely personable and easy to direct through the process. He has a curiosity for technology and groundbreaking processes, and was very hands on during the shoot. It is clear that he takes his craft very seriously and works rigorously to perfect it for each and every film. Our team feels very fortunate to have had the opportunity to meet such a legend in the Bollywood community. We are excited to be working on the face scanning for Mr. Khan. His skill and mannerism is enchanting."


Directed by Maneesh Sharma, Fan also stars Ileana D'Cruz and Vaani Kapoor and it is slated to release on August 14, 2015.