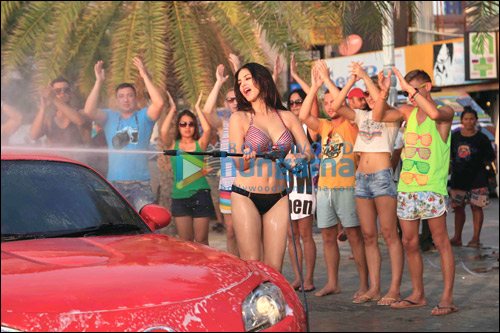 It was an unusually hot day. The sun was beating hard and the sea of sweat was profuse. But that was just nature's way to build up for the things to come. I was witness to Sunny Leone at her sexiest best and more importantly she successfully merged oomph with an inimitable class.

Director Milap Zaveri describes Mastizaade as a volcano of sex and comedy. Leone adds to it by saying that the audience will break into laughter every 30-40 seconds during the course of the movie. Zaveri also said, in a tongue-in-cheek manner, "Film bikni hai, tabhi to Bikini hai." I didn't realize the gravity of his statement till I actually saw Sunny slip into one blockbuster bikini after another raising the temperature in Pattaya by a few degrees than usual.

As Sunny emerged from water, draped in droplets of passion, the camera went crazy capturing the alluring body language and angelic expressions. The lilting-Laila-moves shall drive India crazy. There's absolutely no debate on that. Noted photographer Subi Samuel captured Sunny in Laila's avatar for posters of the film.

"I've hit the gym really hard. I wanna look the best that I can in a bikini or a bathing suit. I've been eating really good," Sunny told me. She looks younger, prettier and in an excellent shape. The peppy romantic song played again as Sunny sneaked into another bright bikini and had fun with Tushar Kapoor reacting to a few quirky dance moves of Mudassar Khan enacted by his enterprising assistants Aman and Abhishri.

Milap shouted out to Tushar to bring in more lust to the table. Kapoor didn't disappoint. I asked Milap if the audience will get to see Sunny kissing her two heroes Tushar Kapoor and Vir Das. "Kissing is missing in Mastizaade. But you won't be missing the kissing as there's a lot happening in the film," Zaveri replied with a glint in his eyes.

Tushar reminisced how he coaxed his sister Ekta Kapoor to include an item song by Sunny Leone in Shootout at Wadala. 'Laila' became the flagship marketing tool of the film. Now Tushar is romancing Sunny in Mastizaade and her character is called Laila. "Sunny is a gift to the industry. She's gorgeous, hot and doesn't look down upon any genre of movies. She's positive and broad minded towards her work," Tushar gushed.

The evening was humid, ice cubes were heavily in demand and tiredness was written on faces around. Sunny had other plans. She lit up the fading evening with bikini moves that will be spoken about for a long time to come. The carefree sensuous moves, the jeweled bikini top shimmering with ecstasy, the long legs (worth-being-ogled-at) in abundance and then the signature dance move of the cool romantic dance track. The awestruck crowd had to be literally forced to disperse once it was announced "Pack Up" for the day.

The hotel swimming pool was a big help in cooling down after a memorably hot day. It goes without saying; the heat generated by Sunny Leone has been imprinted in the corridors of mind for life.

Sleep may be difficult to come.