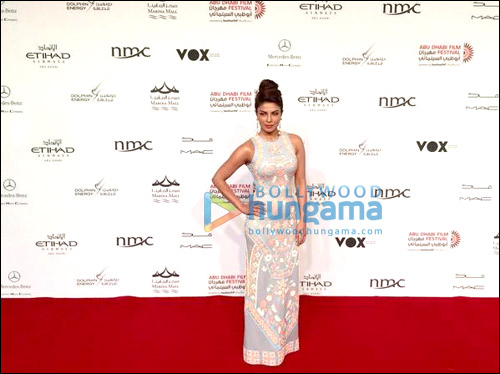 Despite the fact that Priyanka Chopra was recently unwell due to conjunctivitis, it seems that the actress found time to celebrate films. In fact, Priyanka Chopra flew to Abu Dhabi, to attend a film festival that was held in the city.

Priyanka Chopra recently posted about her ailment on her Twitter handle, where she also mentioned that the shoot for Bajirao Mastani had to be postponed owing to her illness. However, now it feels that the actress has completely recovered and is all set for work. Dressed in a Pankaj and Nidhi outfit, Priyanka Chopra attended the eight edition of the Abu Dhabi Film Festival (ADFF). Danglers, simple make up and high bun completed her look. Thrilled about attending the festival, Priyanka even posted about it on her Twitter handle saying, "Beautiful Abu Dhabi... So happy to be at the film festival again.. The power of Indian Cinema for tonight!! Let's Prep...!!" She led the 'Magic Of Bollywood' show which was held at the plush Emirates Palace.

Post her stint at the festival, Priyanka Chopra will wrap up the schedule of Bajirao Mastani in India. Later, she will kick start the shoot of her next with Madhur Bhandarkar, titled Madamji, a social drama that traces the journey of an item girl into the murky world of politics.
Tags : Abu Dhabi Film Festival, ADFF, Bajirao Mastani, Check out, PC, Priyanka Chopra