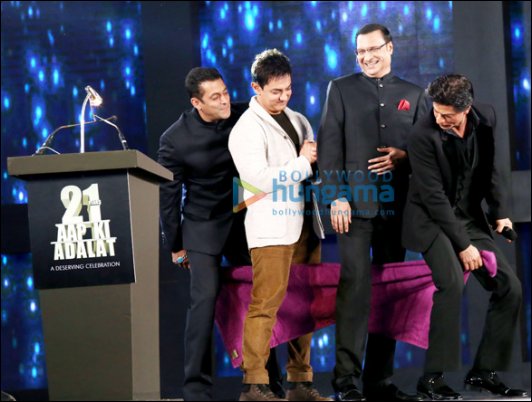 Salman Khan and Shah Rukh Khan coming together first for Baba Siddiqui and more recently Arpita Khan's wedding made headlines. Now we hear that the three big Khans of Bollywood, namely, Shah Rukh, Salman and Aamir Khan came together under one roof to celebrate the21st anniversary of the TV show Aap Ki Adalat.

The shoot for the said anniversary episode that took place yesterday December 2, featured the three Khans in a more than jovial demeanor. On the sets of Rajat Sharma's talk show Aap Ki Adalat, the trio of Khans - Shah Rukh, Salman and Aamir looked at ease with the first picture showing Shah Rukh Khan and Salman Khan enjoying some talk while Aamir Khan smiles nearby.


While this soon to air episode will be one that Bollywood fans across the globe will enjoy, they will mostly be thanking Rajat Sharma for doing something, others could only dream of.