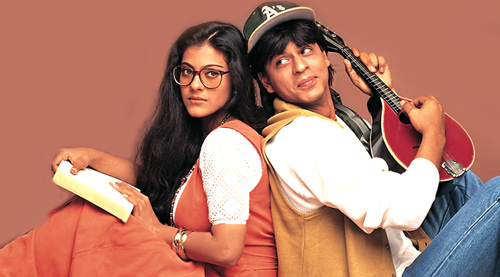 "I've been watching Dilwale Dulhania Le Jayenge every Tuesday since the last four years," Raza, a barber by profession, told me outside the Maratha Mandir cinema hall in Mumbai yesterday, December 2, where DDLJ is all set to complete a historic 1000 weeks on December 12, 2014 making it the longest running film in the history of cinema across the world.

"It was a dream of Yash Chopra ji and me to ensure that DDLJ completes 1000 weeks and by the grace of God and the good wishes of our patrons we shall realize it soon," said an emotional Manoj Desai, Executive Director, Maratha Mandir Cinema. Mr Desai added that they've been running the film not merely to make a record. "People whistle and clap at so many scenes and songs. During the holiday weekends we tend to have housefull shows," he said.

Manoj Desai was speaking the truth, for before the interview, I watched the matinee show of DDLJ at Maratha Mandir the same day to witness the magical romance unfold, egged on by a buoyant crowd. The balcony was almost full while the dress circle and the stalls were generously occupied.

A fluid transition from Europe to Punjab has set in. The buildup of 'Tujhe Dekha To Ye Jaana Sanam' is met with a palpable silence and when Raj-Simran hug each other, the crowd cheers them on with whistles. The theatre turned into a festive arena during 'Mehndi Laga Ke Rakhna'. Even the 'Baharon Phool Barsao' scene between Anupam Kher and Himani Shivpuri was met with whistles and claps. The scene where Raj extends his hand out of the train during the climax elicited loud cheers-n-whistles.

When I came to Mumbai in the year 2000, I stayed in Byculla for one and a half years. Whenever I had free time, I used to make my way to Maratha Mandir to watch DDLJ. Watching a movie is a very sacred exercise for me, however, I get bored easily. Somehow, I've never got tired of watching DDLJ. It always holds my attention. Yesterday too, all the dialogues, scenes, the small moments, effortlessly kept coming to me as the movie unfurled itself.

Manoj Desai is excitedly looking forward to December 12 when DDLJ completes 1000 weeks at Maratha Mandir. The 6 and 9pm shows have been booked by Yash Raj Films for grand celebrations. Mr Desai said that Shah Rukh Khan and Kajol might perform on the big stage of Maratha Mandir that evening. I have a feeling there will be a special screening of DDLJ that night.

The ticket price for the matinee show is extremely affordable (Rs 20/ Balcony, Rs 17/ Dress Circle, Rs 15/ Stalls). How profitable is it for you Mr Desai? "We have costs of the air conditioning etc but this is beyond profits. It's much more than that," he said. There are rumours that the movie will be discontinued once it completes 1000 weeks. "As long as people keep responding the way they do while watching in the theatre, we shall continue showing it," Desai said with a smile.