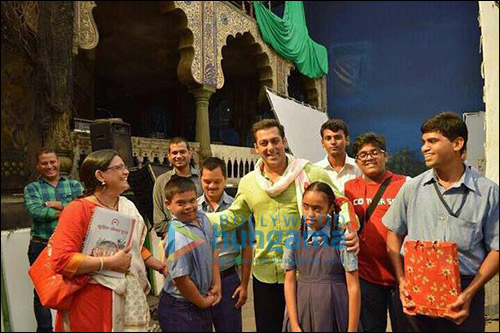 Whether it is Bajrangi Bhaijaan or any other film, Salman Khan has always ensured to meet up with kids in and around the area he is shooting. It's a well known fact that the superstar has a soft corner for children and the actor once again showered his love on them on the sets of Prem Ratan Dhan Payo.

Salman Khan invited some specially challenged children on the sets of the upcoming family drama Prem Ratan Dhan Payo. Amidst hectic shooting schedules, the actor even took a break and was seen interacting with them. While on one hand, the children were thrilled to meet the superstar, on the other, Salman not only welcomed them warmly but even gifted chocolates to them. Salman Khan is also founder 'Being Human' where he and his team work for charity and development of the underprivileged.

Prem Ratan Dhan Payo will have Salman Khan playing a double role and also stars Sonam Kapoor, Neil Nitin Mukesh, Armaan Kohli among others. Produced by Rajshri Productions and Fox Star Studios, the film is directed by Sooraj Barjatya and is slated to release on November 12.