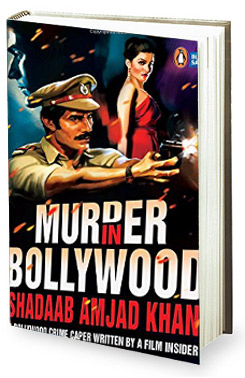 Pulp Fiction - Now this is one genre that continues to be explored in the world of Hindi novels, but is a rarity in the English language. Somehow, the genre has been scoffed at in the mainstream fiction arena, at least in the Indian writing scene. Yes, Sikandar director Piyush Jha has tried that by tuning novelist with books like Mumbaistan (2012) and Compass Box Killer: An Inspector Vikrar Crime Thriller. However, these have been rarities in the times when constant attempts are being made by Indian novelists to make their work more appealing to international readers.

Well, there could be a shift round the corner with Shadaab Amjad Khan's Murder in Bollywood.

The author stays true to the genre of pulp fiction, doesn't even attempt to stylize the entire affair just to lend it gloss, doesn't fall into the pit of using cuss words even once right through the 225 odd page affair, has a complete hold over proceedings right from the first to the last page, and in the process comes up with an edge of the seat murder mystery that keeps you guessing throughout.

When a leading Bollywood director makes an announcement to a bunch of friends - 'Someone at this table has killed before, and someone at this table will kill again' - and he as well as his actress wife are killed soon after in two separate accidents, there is an apparent hint that these were actually murders. More so, when their closest accomplices start getting killed as well in quick succession and neither the suspect nor the motive is hard to be detected. This is where Inspector Hoshiyar Khan comes into picture who is smart but never over-smart, intelligent but not cocky, workaholic but not boring.

In short, a man who means business but doesn't throw that attitude on your face.

This is what makes Murder in Bollywood interesting because it is supremely engaging but still keeps the reader on the same path as the Inspector without deviating from the plot. Even as you are introduced to a dozen odd characters, whether it is the teenage son of the director and the actress, the doctor couple who are close friends of the family, a star secretary, a senior high headed cop, an inquisitive junior investigator and a mysterious stranger amongst others, you do get an impression that each one of them is involved in some way or the other by either being a link to the murder or as someone who would solve it.

Thankfully, this one never falls into the trap of being a quintessential slasher thriller or the kind that just moves in one direction. There are multiple angles which are explored here and what makes it all the more interesting is that you don't really have to wait right till the end before the murder is entirely solved. Mid-way through the book, you join Hoshiyar Khan in solving the crime and layers after layers after explored in practically every chapter. Even as there is a glimmer of murderer's identity being evidenced, it is the motive that is yet unclear.

That's what makes this work of Shadaab extremely intriguing as the mystery element is not entirely unveiled, and yet you do feel rewarded by some revelation or the other being made, hence making Murder in Bollywood come across as a true-blue account by an insider from the industry. Shadaab, son of Late Amjad Khan, demonstrates that he has good hold over the genre and since he is an insider from Bollywood, there are a few anecdotes and references thrown in (again, without even once coming across as over the top), which helps the novel come across as a good read, especially for the film buffs.

Oh yes, at times Shadaab frames really, really long sentences to convey the mood and situation for a character or a scene. Due to this, as a reader you end up losing context at a couple of times around where you started reading a sentence and how it ended. However, this is a minor aberration in the bigger scheme of things because perhaps it comes with the genre.

As for those who love this genre, especially from the 90s when novels by famous Indian Pulp Fiction writers like Surender Mohan Pathak and Ved Prakash Sharma used to do brisk business, you would certainly pick up Murder in Bollywood and also recommend to those who are fond of murder mysteries.

“Marriage is the best thing to have happened…