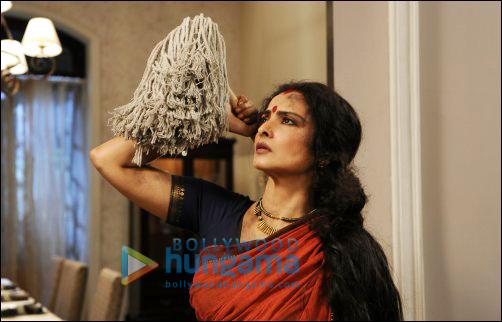 After four years, Rekha is all set to make a comeback on the silver screen as Super Nani. The film will have Rekha playing a grandmother who shares a very special bond with her grandson played by Sharman Joshi. We bring you a new image from the sets of the film wherein Rekha has wonderfully recreated none other than the iconic Mother India image made famous by Nargis way back in 1957.

The actress is seen posing with a mop exactly in the way Nargis posed in the film with a plough. However, the reason for having this as a part of the film is still a mystery. Super Nani is the story about a grandson who motivates his grandmother to take up something new, so that it adds meaning to her monotonous life.

While Super Nani was slated to release in May 2014, the film had unfortunately faced many delays and now finally it is back on track and its trailer will be out soon. In fact, it has been recently announced that the trailer of the film will be attached to the Sonam Kapoor - Fawad Khan starrer Khoobsurat. The reason for this is that, Khoobsurat is a remake of a 80s classic by the same name which had Rekha playing the female lead. And now producer of the Sonam Kapoor starrer, Rhea Kapoor, is very excited that Rekha is once again being associated with the film since the trailer of her comeback film will be attached with the remake of her own film.