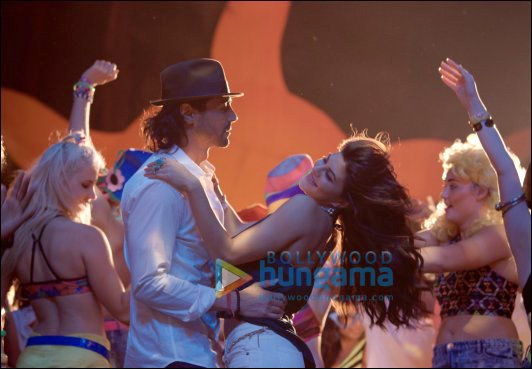 With much anticipation, the trailer of Roy seems to have garnered a lot of curiousity considering the mystery around the plot. With Ranbir Kapoor playing the unpredictable thief and Arjun Rampal too in a different look, the two are paired with Jacqueline Fernandez for the first time in a film.

And as the trailer portrayed, Jacqueline Fernandez in a double role is seen romancing with the two hottest hunks of Bollywood in Roy. Here's a glimpse of the actress dancing away to glory along with Arjun Rampal and Ranbir Kapoor in the song 'Sooraj Dooba Hai'. This romantic number composed by Amaal Malik and penned by Kumaar, is sung by Arijit Singh and Aditi Singh Sharma. Moreover, Jacqueline Fernandez will be seen in two different looks in the film where one dresses up elegantly yet glamorously, the other look is more vivacious and funky. On the other hand, Arjun Rampal will play the role of a director in this romantic thriller.


Produced by Freeway Pictures in association with T-Series, Roy also stars Anupam Kher and Rajit Kapoor. The film marks the debut of Vikramjit Singh as the director and it is slated to release on February 13.