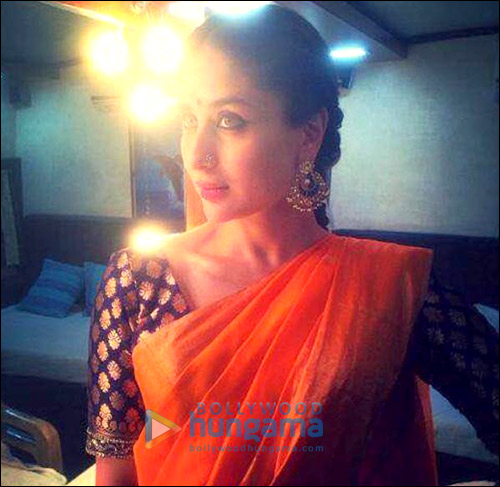 Amidst many Bollywood celebrities who are completely in support of Prime Minister Narendra Modi's Swachh Bharat Abhiyan, Kareena Kapoor Khan too decided to give the campaign a boost by participating in it.


Currently, the actress is shooting for her upcoming film titled Bajrangi Bhaijaan in Karjat. During this schedule, we hear that Kareena Kapoor Khan has been dedicating some of her time to the campaign and decided to do her bit to extend her support to the cleanliness drive. Recently, pictures of the actress painting walls in those surroundings have been doing the rounds on the web. Moreover, it is also being said that she even cleaned the area around it as a part of the campaign. Earlier, her co-star in the film, Salman Khan too had done something similar and had even taken a broom to sweep the surroundings. In fact, Narendra Modi impressed with the actor's efforts decided to tweet his appreciation too.

While there is a lot happening on the sets of the film, we decided to give you a glimpse of the saree clad avatar of Kareena Kapoor Khan in the film too. From what we hear, the actress will play the role of a Brahmin girl from Lucknow who shifts base to Delhi's Chandni Chowk. Hence she will be seen in ethnic outfits, with most of them designed by her favourite designer and friend Manish Malhotra. Set against the backdrop of a love story between Kareena-Salman, Bajrangi Bhaijaan also will revolve around contemporary subjects of debate like politics.


Directed by Kabir Khan, Bajrangi Bhaijaan also stars Nawazuddin Siddiqui and it is slated to release on July 16, 2015.