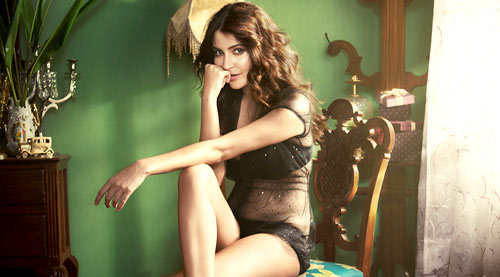 Almost two years after Matru Ki Bijlee Ka Mandola, Anushka Sharma is returning with a vengeance. While she has multiple films lined up for release in next 12 months, it would be the magnum opus PK that would bring her back on the big screen. Even as the much anticipated film is now running in theaters, Anushka Sharma gets into a relaxed conversation amidst 'hazaar' other interviews that are needing her attention.

You are someone who is never ever seen in a frivolous affair. I am sure there must have been something terrific about PK for you to do it, right?

Honestly, when Rajkumar Hirani called me to meet for the film, I told myself that no matter what, I am going to work with him. His female characters may not have a very lengthy role per se but then they are always very significant. He characterizes them quite well and hence it was a no brainer for me to do PK. I am such a huge fan of his work and honestly, even if it was just a 20 minute role, I would have done that. Guess I met him with such purity in heart that even God said - 'Le beta, I will give you much more than just 20 minutes (smiles)'. I am blessed.

You seem to be in complete awe.

You know, when it comes to a Raju Hirani film, it is not just a movie experience but an opportunity to be a part of something significant; something which inspires people, makes them think and sets them on a much higher level. The only way I can make something of my career and look back proudly at my body of work is by playing memorable roles. Hirani guarantees that.

For someone whose career has only seen a rise since the days of Band Baaja Baaraat, it is expected that you must have infused substance into your performance all over again, right?

I will tell you something. Recently, the most rewarding experience for me was when in a recent interview where both Raju and I were there, he made a statement that 'If Anushka is given a role, she elevates it to a different level altogether'. Now he had never said that to me on face ever before but here he was saying it on a public forum. Now that's the kind of compliment I look for. While shooting, every day on the sets I used to think that Rajkumar Hirani and (writer) Abhijat Joshi are so good that I should be doing something more. Now when he himself said that I was good; I was zapped. I like such pat on my back.