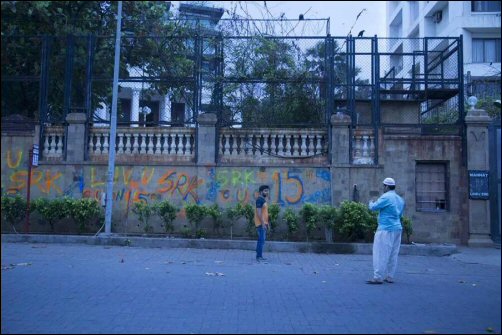 Shah Rukh Khan's dream home Mannat, situated in the prime locality of suburban Mumbai, has faced many controversies. While many activists protested for allowing public to use

the road outside the palatial residence for commuting, especially during the Bandra fair, the iconic bungalow has even had fans creating chaotic situations in order to meet their favourite

However, the outer walls of this beautiful sea side facing bungalow is now filled with graffiti. Apparently, mysterious fans of Bollywood mega star Shah Rukh Khan painted graffiti on his residence wall on Wednesday.


The compound walls were painted with messages like 'love you SRK ' and c u on 15th. The messages were signed 'Gaurav'. There is no clarity on who painted the walls and what message he/she wanted to convey.

The messages come in the wake of newly thawed relations between SRK and Salman Khan whose movie Bajrangi Bhaijaan is going to be released on July 17. Salman Khan recently bashed his followers for unnecessarily rubbishing other stars while praising him and threatened to quit social media if this continued.


Security guards at Mannat were clueless about the graffiti and said they were not going to touch it till 'the boss' ordered them. "There is nothing wrong with graffiti and we don't see any need to cover it. Anyway, boss isn't around and will be back only after 20 days or so. If he calls and asks us to remove it, we will do it," said a security guard on conditions of anonymity.


Shah Rukh Khan resides in Mannat with his family which includes his wife Gauri Khan, his kids Aryan, Suhana and AbRam.