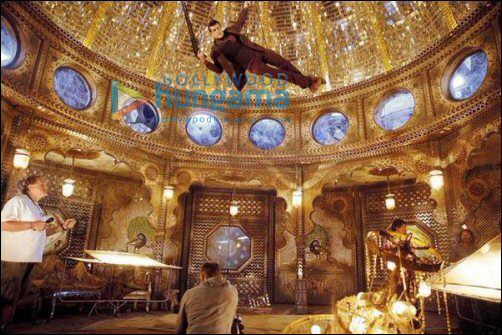 with a sword inside the palace, now, it is the villain of the film, Armaan Kohli who is seen doing some stunts.

In this picture that has gone viral on the web, Armaan Kohli is seen balancing himself on a harness whilst holding a gun.

Unlike the last few films of Sooraj Barjatya, the makers have decided to add some interesting stunt sequences and Salman Khan

will be seen doing some action scenes in the film. On the other hand, the set that has been created for the film is on the

lines of 'Sheesh Mahal' and resembles the palace that was used in the Bollywood classic Mughal-E-Azam.

Nitin Mukesh, Swara Bhaskar in prominent roles and is slated to release on November 12, 2015.