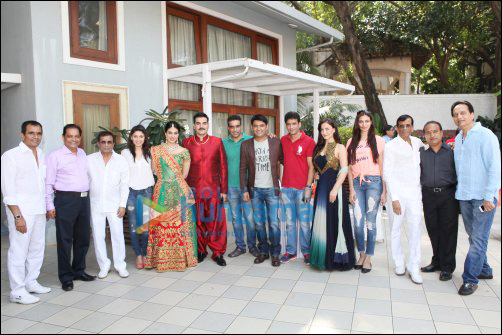 After acting, brother of superstar Salman Khan, Arbaaz Khan decided to take up filmmaking and production. Though he enjoys the process of making a film equally, Arbaaz has been making special appearances in films lately. However, now the actor turned producer has decided to act in a film directed by his favourite director duo Abbas-Mustan.

The director duo have often been appreciated for their fast paced stylish thrillers but Abbas-Mustan this time around are venturing into the genre of comedy with stand-up comedian Kapil Sharma making his debut in Bollywood with this untitled project. And Arbaaz was later roped in by them for a prominent role in this untitled venture. Giving a glimpse of the first day of the shoot with the directors and Kapil, Arbaaz Khan posted this picture on his Twitter handle and wrote, "Mahurat shot just done ! Kapil sharma makes his film debut. It's a super comedy. Looking forward to working with him." Talking about his debut film Daraar which was also incidentally directed by Abbas-Mustan, Arbaaz wrote, "Working with the duo after Daraar. Great feeling to be back on their set."

Arbaaz Khan was last seen in Dabangg 2 which was also directed by him and it starred Salman Khan and Sonakshi Sinha in the lead. The actor is also producing Dolly Ki Doli which stars Sonam Kapoor along with Pulkit Samrat, Rajkummar Rao among others.