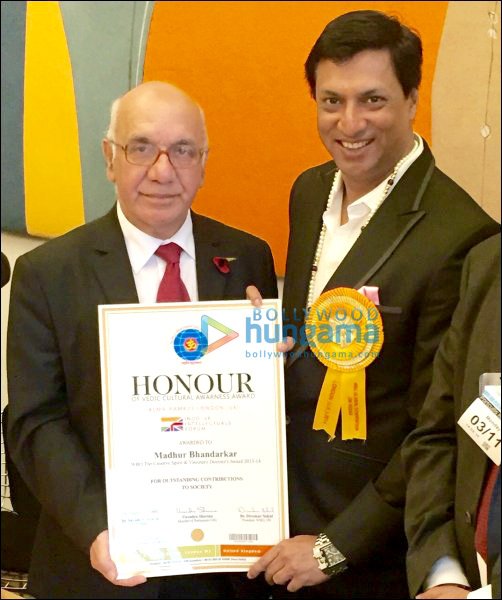 The multiple National Award winning filmmaker Madhur Bhandarkar known for hard-hitting movies like Page 3, Fashion, Chandni Bar, Corporate and Heroine was conferred with a prestigious international award, the Creative Spirit and Visionary Director's Award for 2013-14 at House of Commons, London, for his extraordinary contribution in the creative field and exceptional courage to present the truth through the medium of cinema.

The honour was conferred upon him by British Member of Parliament, Mr Virendra Sharma.

The filmmaker was recently conferred with the Raj Kapoor Smriti Award from the Maharashtra Government for his contribution to Indian cinema and was also honored by Hollywood's veteran actor Tom Bower at 2014 Syracuse Film Festival, New York

An overjoyed Madhur Bhandarkar says, "I am amazed and humbled by the honours and awards coming my way! I accept the WBO Award in all humility. I am grateful to the WBO and to my fans and audiences around the world for appreciating my films."

Madhur Bhandarkar is currently working on Calendar Girls and his next film Madamji, which stars Priyanka Chopra will commence shoot in December.