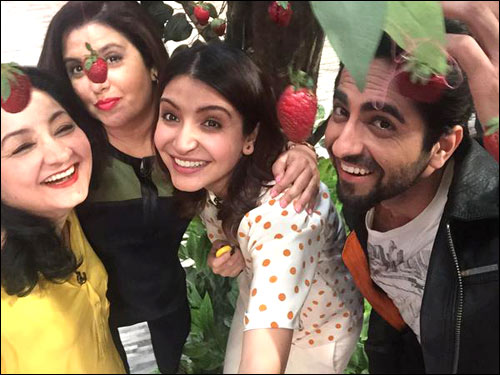 'Farah Ki Daawat', yet another show hosted by Farah Khan after 'Tere Mere Beech Mein' has a lot of spicy things cooking up in the celebrities' kitchen. From the Bigg Boss contestants' pani puri contests to the young Alia Bhatt trying her culinary skills, the show has stars sharing their favourite recipes and the friendly banter with Farah only adds to the fun.

The new guest on the show was Anushka Sharma and Farah Khan was more than happy to see her friend cook some mouthwatering paneer delicacy during her stint on the show. Showering praises on her dish, Farah took to Twitter saying, "Look who came to cook on #FarahkiDawaat today?! @AnushkaSharma thank u baby 4 "paneer a la sharma"! See u at home now." Accompanying the actress was her mother Aashima and yet another celebrity guest, Ayushmann Khurrana. Farah took to Twitter to post a selfie with them and said, "with her came her wndrful mom Aashima n my old pal @ayushmannk .. It's so lovely 2 do a Daawat where the guests cook".

This was not the end of the guest list on Farah's cookery show. Yet another celebrity who dropped by was none other than Karan Johar! Not only did Farah post a picture with her friend-filmmaker, but she also took a dig on the AIB roast saying, "The funniest episode with @karanjohar n NO v didn't make "Roast" chicken".
Tags : Anushka Sharma, Ayushmann Khurrana, Check out, Farah Khan, Farah Ki Daawat, Karan Johar