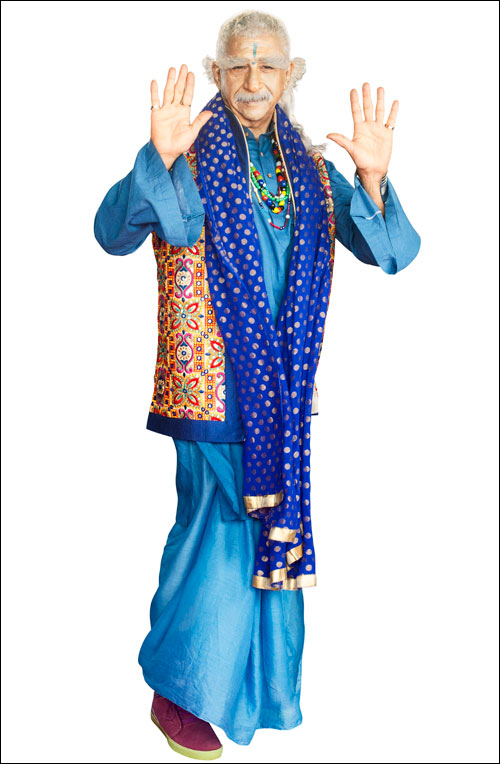 Coming from the makers of OMG - Oh My God is yet another satire titled Dharam Sankat Mein that deals with the blind faith of people on godmen in India. In this film, Paresh Rawal contrary to his character in the previous film will play a devotee of Neelanand Baba who blindly follows the 'Neel' eccentricities

The role of Neelanand Baba is played by Naseeruddin Shah who will be seen dressed up in blue attire with an embroidered jacket and dark blue with golden work dupatta in the film. Moreover, he will also be seen wearing a blue tika throughout the film. His unique avatar and his eccentricities are being used as a marketing tool by the makers on social media platforms, that too with a dash of humour.

Calling it as the 'Neel Dharam', the makers have been providing satsangs, granths and pranam and have even composed a 'Neel Anthem' to promote the film. They have even extended this campaign to malls and public places where 'Neel Bhakts' will be seen sporting 'Neel' (blue) robes. Elaborating on the same, Rudrarup Datta - VP, Marketing at Viacom18 Motion Pictures said, "Dharam Sankat Mein is one of the funniest social satires this year. We wanted to create a quirky marketing campaign that is out of the box yet one that reflects the wit in the film. Neelanand Baba and his in-your-face hilarious antics are sure to get your attention. Make sure you check out the coolest Dharam in town!"