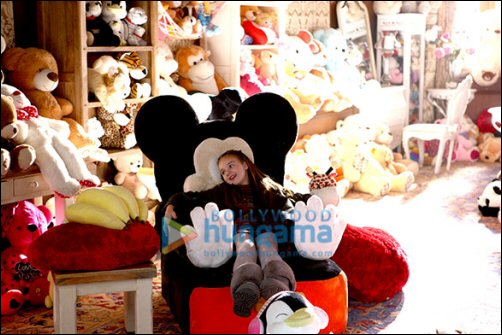 After several setbacks and delay, finally, Ajay Devgn's ambitious project Shivaay is back on track. The actor who will also be

directing it has left no stone unturned for the film and recently decided to get over 2000 custom made toys just to get a scene right.


Being a doting father of two, it isn't surprising to see Ajay Devgn's fondness for kids. The actor recently decided to make his on screen daughter Abigail

Eames' room look beautiful by ordering for these 2000 toys in the film. A source close for the production team said, "Ajay is putting renowned expertise and

his entire heart & soul into making this movie as he plans every detail to the T. Hence, recently when we had to shoot in Abigail's room, he called for

more than 2000 custom made stuff toys so that the room looks extravagant."


Shivaay produced by Ajay Devgn along with Eros International, also marks the debut of Sayesha Saigal, grandniece of veteran star Dilip Kumar. The

film is slated to release in October 2016.