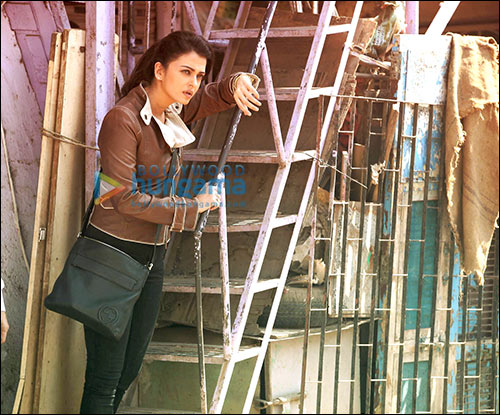 Aishwarya Rai Bachchan, who is shooting for her comeback film Jazbaa was recently spotted shooting at a place called Dongar in Andheri. Dongar is known to be a scrap yard for cars and machinery and not really a convenient place for a shoot. Despite it being a dingy place, Aishwarya had no qualms shooting at the place.


She is a thorough professional when it comes to her work and even walked three-four kms to the location as vehicles cannot pass through it easily. "The makers were prepared to construct a set, but since the film is shot in real locations in Mumbai, Aishwarya decided to shoot there and not in a studio keeping in mind the feel of the film," says a source. Security was beefed up for Aishwarya when she shot at Dongar.


Jazbaa directed by Sanjay Gupta will see the actress playing a lawyer and Irrfan Khan, a suspended cop.