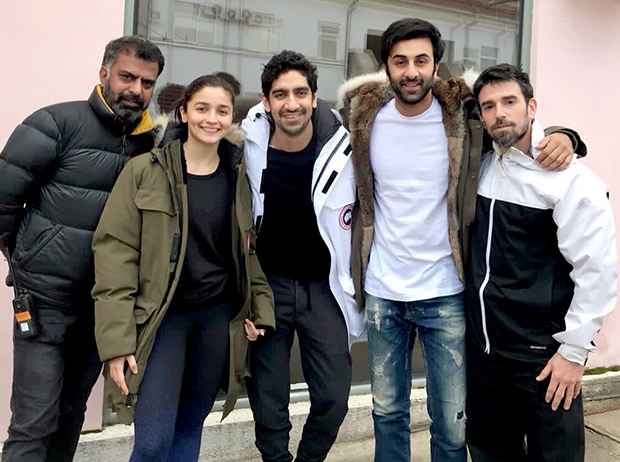 While in Bulgaria, Alia Bhatt, Ranbir Kapoor, and Mouni Roy are training hard under the experts. The international stunt co-ordinators for high octane action sequences. Ido Portal, who has been training Ranbir and Alia since last year for the film, recently shared a picture with Ranbir, Alia, and Ayan. He praised working for them, how they are hard working and how things in Bollywood work.

In a heartwarming post, Ido Portal wrote, "The world of cinema does not escape the modern battle between technology and the humans that created it. Where cinematically new technologies have opened endless possibilities for the visuals on screen, acting has suffered tremendously from these developments, along with performers and their bodies.

Actors have become somewhat ... Disconnected ... Excessive focus on verbal communication, words and facial expression have taken center stage but the rest of the body is far from keeping up - in posture, movement, intention, position, organization and dynamics.

You look at most modern films done these days and see an actor speaking - one energy but if you observe the body and especially if in movement- completely different story.

Bollywood in this regard is in much better spot than Hollywood, for example, as Indian culture as well as film still contains a fair amount of movement, actors are often required to dance in multiple songs and keep somewhat mobile and coordinated, able to study choreographies, get in rhythm, move and express through motion.

I’ve been fortunate to collaborate on the production of a special idea- Brahmastra, the brainchild of director and good friend Ayan Mukerji. Ayan is a dreamer. An innovator and a daredevil in how he approaches things. We’ve spent a lot of time together over the last year putting imagination, mind and body into the development of the characters.

My role was initially movement design for the main character and later the transmission of that design into the actor playing that role- the talented Ranbir Kapoor. Brahmastra seems to evolve in the direction of innovation, and collision/collaboration between incredible technical powers with the ever-present and old skool refinement of movement, body expression dynamics and gesture.

I’m honored to take part in this production but most importantly happy for the friendships and great creative times spent in the development of this film. Thanks Ayan and the whole production for your trust in me and my vision! It’s been and keeps being an immense pleasure!"