A recent photo that has garnered attention on social media is a star studded one where the cast of Brahmastra met the cast of Rocketry - The Nambi Effect. The soon-to-be father Ranbir Kapoor, who will next be seen in Brahmastra, was seen posing with ISRO scientist Nambi Narayana, his onscreen self, R Madhavan, Shah Rukh Khan, filmmaker Karan Johar and bestie Ayan Mukerji in this picture. Looking at the background, it seems like the sets of a film. 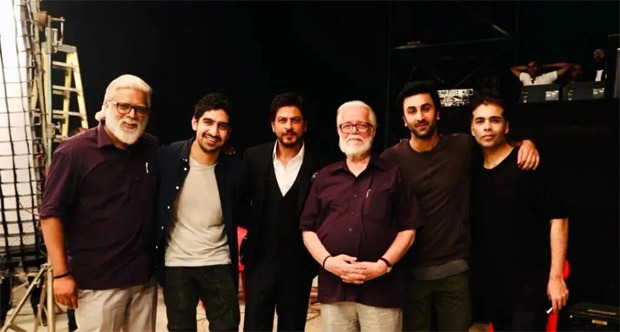 Interestingly, Shah Rukh Khan is a part of both films. Readers would be aware that Shah Rukh Khan has done a cameo in Rocketry – The Nambi Effect in its Hindi and English versions whereas the South version features superstar Suriya. On the other hand, we had earlier reported that the superstar has a cameo in Brahmastra. While his role in the film is kept under wraps, the recently released trailer fueled up many theories regarding King Khan’s role in the Dharma Production venture. With Ranbir Kapoor playing the lead role in the mythological fantasy drama, it is directed by Ayan Mukerji and features to be mother and Ranbir’s wife Alia Bhatt as the leading lady.

A fan club of Shah Rukh Khan recently shared this photo on their Instagram handle. Here, have a look at their post:

As for Shah Rukh Khan, the actor is currently busy with many films in the pipeline. While he will next be seen in an action packed role in the film Pathan that stars Deepika Padukone and John Abraham in pivotal roles, he also films with Rajkumar Hirani and South filmmaker Atlee. Collaborating with Hirani for the first time, the actor will be seen alongside Taapsee Pannu in Dunki. On the other hand, South superstar Nayanthara will be paired opposite Shah Rukh in Atlee’s film Jawan.

Also Read: To RK, With Love: Ranbir Kapoor to celebrate 15 years of his career by thanking his fans