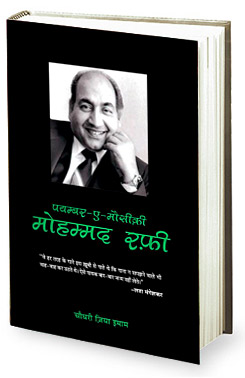 I was quite happy to see a book on Mohd. Rafi out there on the stands. Surprisingly, there haven't been many books written on the legendary singer. Even though R.D. Burman, Gulzar and Lata Mangeshkar stay on to be hot favourites amongst the older as well as younger generation as far as exploring their life is concerned, surprisingly it isn't quite the same for legends like Mohd. Rafi and Kishore Kumar. With expectations of unearthing something new about the singer who has regaled generations for decades, I eagerly picked up the book 'Payambar-E-Mausiki Mohd. Rafi'.

Alas, my excitement was very short-lived as the book, which is more of a tribute than a biography, turned out to be a hollow read which doesn't delve at all into his personal or professional life.

In this book written in Hindi (and partially Urdu), author Chaudhary Ziya Imam confesses that he is saddened about lack literature available on Mohd. Rafi. In fact this was the very cause of inspiration for him to penning this book. However with a one point agenda of presenting Mohd. Rafi like never before, Chaudhary could have gone all out in bringing to fore the real man. Unfortunately though, it doesn't quite happen as this book too just stays merely on the periphery without really presenting anything interesting to the reader. Now that's what really pegs the book down because it is clearly a case of an opportunity lost.

The book starts off well though where it is mentioned how a 'fakir' gave 'dua' to a young boy (who became THE Mohd. Rafi a couple of decades later) that one day he would turn into a very big man. Of course such stories are all hearsay as there is no documented evidence around that. Still, even if one reads this as a fictional account, there is some level of interest developed as you are led to believe that the life and times of the singer would be up for grabs in pages to follow. That doesn't quite happen though as some random incidents are presented to the reader and that too in not really an engrossing format that would have made one aim at finishing the book in a jiffy.

This means that despite glimpses of incidents that led to Mohd. Rafi's rise to fame and his initial interaction with Naushad, there is hardly anything memorable that one gets to read about him. Now that's a pity because one expects ton loads of anecdotes and snippets around the great singer in his career that has lasted decades. However the approach taken by Chaudhary is to pen down the book as an encyclopedia which, thought in depth, turns out to be a boring read and only makes it fit for being a reference guide than a biographical account.

Hence those looking for gaining knowledge about the composers with which Mohd. Rafi worked, his co-singers, actors for which he sung, the genre of songs he explored and the entire filmography, there is considerable material that has been made available as a part of this book. However, as far as his real life is concerned, all that one gets to read is that he was a man of high morals and simplicity, something which isn't hidden from even a layman, leave aside a diehard fan.

Eventually, one is left a lot under-whelmed when this 200 odd page book comes to a close. If the material by itself is hardly inspiring, the text book layout, ordinary print, boring design and an overall lack of finesse only ends up adding to the disappointment.

"I've made Lataji promise to sing for me…

Lata Mangeshkar on why Ganesh Chaturthi this…