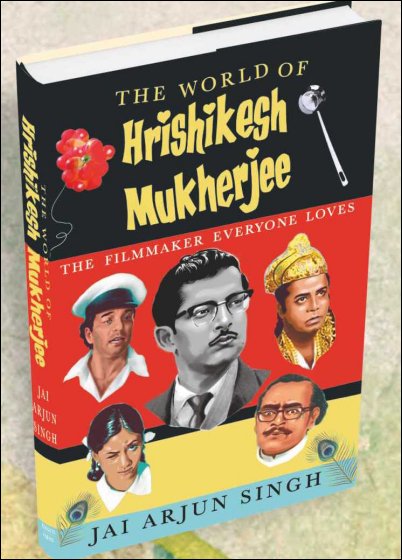 "When I began writing this book, it wasn't my intention to put forth a Big Theory or Thesis that would 'explain' or summarize Hrishikesh Mukherjee's cinema"

This is what author Jai Arjun Singh says on Page 69 of this 300 odd page book which he puts together on the legendary filmmaker.

Alas, but despite the clarification, this is exactly what the book turns out to be by the time one reaches this page. With a flurry of chapters that aim to find the many nuances, similarities, commonalities and coincidences in the frames captured by the filmmaker, The World of Hrishikesh Mukherjee turns out to be an exhaustive read. So much so that the very core of Mukherjee's films - simplicity - is lost in the pages which go on and on and on around what made his films. What you get to read quite a few theories, inferences, conclusions when instead you would have hunted for some interesting anecdotes.

This is where the disappointment factor sets in because the book turns out to be an in-depth account of the many scenes, dialogues and moments that Hrishikesh Mukherjee brought in his films. Nothing wrong with that as this is what must have interested the author. However, for a larger segment of audience out there, there is a sense of disconnect that may set in as except for a handful of Mukherjee films that are still being spoken about today, majority have not even been known to the generation gone by, leave aside the current generation.

Yes, Golmaal is still being seen, and so is Chupke Chupke. Khubsoorat was remade last year while Mili and Guddi are being talked about fondly. When it comes to some of the greatest performances of Dharmendra, Amitabh Bachchan and Rajesh Khanna, films like Satyakam, Anand and Nama Haraam are mentioned. Fair enough. However, beyond these there are number of known and unknown films that were made by Mukherjee, which led to a repertoire of 40 odd films.

Ok, so point taken, this must be a surprise to many out there that he had many so much films between 1957 [Musafir] and 1998 [Jhooth Bole Kauwa Kaate] in a career spanning four decades. A good individual account of these films would have helped too. However, what the author does here is to go through majority of these films and then try to link sequences, dialogues, ethos and milieu between them all. A good effort indeed but then when it comes to the reader's interest, it is clearly lost.

What would have perhaps made for an engaging read are conversations with those who worked on Mukherjee's films and bring on references to some of his more popular work. A more structured narrative would have helped too because while aiming for fluidity, Jai Arjun Singh moves on from one film to another with scenes being connected haphazardly and in the process, suddenly you find yourself lost between the start and the end point. It appears as if the author was aiming for that big 'aha' moment that 'Hey, you didn't catch this one, right?' and in the process, it turns out to be a one way communication street.

A few years back, Jai Arjun Singh had come up with the book 'Jaane Bhi Do Yaaro: Seriously Funny Since 1983'. Now that was an exciting read indeed. Short, sweet and simple.

Something as engaging as that would have been far more exciting.