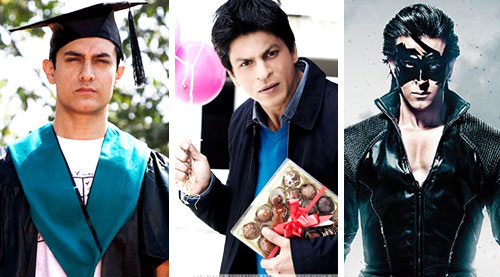 The Indian film industry is on a roll! As the Chinese premiere Xi Jinping visited India and slew of co-operation measures declared by India, under the leadership of our dynamic Prime Minister Narendra Modi, we have got a pleasant surprise of the country entering into a joint venture. A joint venture with China is news that should be a reason to rejoice for everyone associated with our film industry. That is because China is a country where not more than three dozen foreign films are allowed to be screened in the mainland. That is because a film made under joint venture with a certain country is considered as a local film and not a foreign one! So, this great development is surely going to untap an incredibly vast market for our films!

China, a country that has become as lovable and giant as its identity of Dragon today, has been conquered by the Indian film industry; especially Bollywood is not a small feat by any means. And big credit for this should go to Hindi film industry's best known showman Raj Kapoor. His film Awaara is one of the films that had floored Xi's wife Peng Liyuan. It was her initiation to persuade her husband by explaining how Hindi film's demand is at rise in their nation.

However, not many Hindi films have managed to release there. From Awaara in 1951 to Do Bigha Zameen after that, followed up by Caravan of 1980 (released there as Da Eng Che and became a runaway hit!) and Noorie, very few Hindi films made it to the Chinese screens for decades. Since Lagaan days, however, the number of Hindi films releasing there has gone a little higher. So, our productions like Munnabhai MBBS, My Name Is Khan, Ra. One, Dhoom 3, 3 Idiots, Krrish 3, Chennai Express tested Chinese waters and had little to moderate success. The best among all till date remains 3 Idiots that earned Rs. 11 crores ($2.11 million) there. But if compared with what Hollywood movies are raking in there, this figure is paltry. For, Titanic 3D earned $67 million in flat six days there! Avatar posted collections of $182 million while Transformers - Dark Of The Moon and Kung Fu Panda -2 also made it big.

But a new beginning can be made any day and it seems such a lovely day is now round the corner. Having a joint venture with a country that has double the screens than of our 11,000 means a great opportunity. China is a country that presently posted box-office collections of a whopping $3.6 billion or Rs. 21,900 crores in 2013. With joint venture providing opportunities for Hindi films to release in larger numbers and thus giving bigger slice of collections, China could soon be an important map on Bollywood's radar. And if we succeed understanding Chinese viewers' pulse and give quality and relatable films to them, this could become a reality sooner than we imagine.

As you'd be reading this, China should have become the tenth nation with which India is having a joint venture treaty done for films. More details on the subject are being shaped up by our I&B Minister Prakash Jawdekar and his Chinese counterpart CÃ i Fuchao. The two leaders are also meeting this November in Goa as China takes part as a guest country in International Film Festival of India 2014 happening in the state. The two nations are, besides signing a formal MoU, planning a working group for the purpose. The joint venture is likely to be executed under a set-up similar to NFDC, Films Division, etc.

Gear up Bollywood, and say Huanying (welcome in simplified Chinese) to a golden dawn!

Atul Mohan is the Editor of Complete Cinema, a Trade magazine weekly