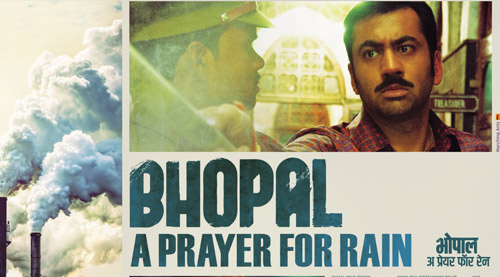 Only three media houses from India had been invited for this special screening. It was my privilege to represent Bollywood Hungama at such a global platform interacting with some of the biggest stars on the international stage. I was ushered into a suite at Plaza with a terrace that showcased the fabulous skyline of New York. But then the serious subject of Bhopal A Prayer For Rain took over completely and I was totally involved with the humungous man made tragedy that struck Bhopal thirty years back.

Martin Sheen plays Warren Anderson, the chief of Union Carbide who never apologized for his insensitivity and gross criminal negligence. Sheen is thrilled that the film is finally releasing (it was complete in 2009 but reportedly due to political pressures it couldn't get a release). Indian Prime Minister Rajiv Gandhi had Facilitated the safe passage of Warren Anderson immediately after the ghastly incident. It is considered one of his biggest blunders.

The film doesn't show this aspect and Sheen doesn't want to go into the political compulsions and blunders. He strongly believes that the victims and the families of Bhopal Gas Tragedy deserve some sort of closure. A paltry 300 dollar compensation was given per corpse. Warren Anderson hasn't been photographed (except once) in the last 30 years. He and his family never accepted guilt. Director Ravi Kumar is of the opinion that if Anderson's family takes an offense to this movie and files a law suit against the makers of the film then he's most welcome to do so. "If he files a law suit then he's accepting that he was involved in some way and go away from the official line of Union Carbide that put the blame on local team's mismanagement and mishandling of the situation," Kumar said.

In the evening, the special screening of the film made everyone's eyes go moist. A Hollywood crew helped me out with camera equipment, sound and lighting for the interviews. When I was doing my Piece-To-Camera commentary for our video report, one of the cameramen told me to look into the camera and tell him what I know about the Bhopal gas tragedy and how it affected me. The cameraman said the film moved him immensely and he strongly believes the culprits ought to be booked.

The thriller format of Bhopal A Prayer For Rain is engaging. It grips your attention and you get sucked into the catastrophe and helplessness of innocent people who're unabashedly used for the lust for corporate greed. Rajpal Yadav plays a poor worker who continues to work in Union Carbide despite knowing the gross safety negligence on the part of the authorities. Rajpal excellently portrays the plight of a poor man sucked in the dilemmas of life. Poverty in itself is the biggest crime. It pushes people into doing things that no human being should remotely attempt.

Bhopal A Prayer For Rain is releasing in USA in November 2014 while it's having its worldwide release (including India) on December 5, 2014. The entire star cast is excited to promote the film in India. The producers Sahara Movie Studios and Rising Star Entertainment informed me that they have an elaborate plan for promoting the film both in India as well as all across the world. Sting might be coming to India for promoting the film as well.

On a personal note I genuinely feel that Bhopal A Prayer For Rain will sensitize the world about the ghastly incident that happened 30 years back. I hope the victims and their families will finally find some sort of genuine relief and that can only happen if the guilty are brought to book.