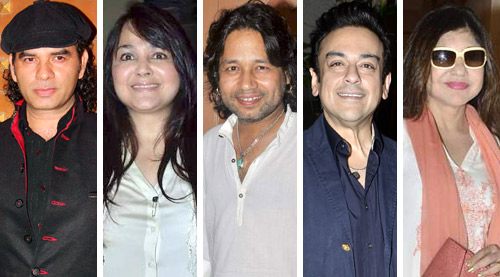 Shraddha Kapoor, Ali Bhatt, Varun Dhawan, Ayushmann Khurraana...they've all done it. Should stars sing their own songs? Bollywood singers have their say...


Mohit Chauhan: "It's a fantastic trend! We get to hear a variety of new voices and experience a new facet of an actor's talents. Our film industry has always had singing stars. So this would just be an extension of an existent trend. Having said that, I must also say that we must seriously look at some serious role reversal, with singers being signed up to act."


Alisha Chinai: "Can you imagine Julia Roberts lip-syncing to Madonna? It is happening here. Playback singing was never a credible trend. The trend of ghost voices had to change, as it does justice neither to the actor nor the singer. I am glad actors are waking up to the possibilities in their own voices. Now every Bollywood actor is a wannabe singer....great!"


Kailash Kher: "Trends in the film industry are cyclic, like life itself. In the beginning our cinema had actors who would sing like K L Saigal, Surendranath, Tun Tun (Uma Devi), Noorjehan, Suraiya and Kishore Kumar. During those days filmmakers preferred to sign actors who could sing. Today actors and musicians are successfully blurring the lines between singing and acting. It's all good as long as they sing as well as they can act."


Adnan Sami: "Why not? If they have the talent to sing they should and must. God has blessed us with many talents and it's our duty to harness it and share it with the world. If you got, flaunt it."


Wajid (Sajid-Wajid): "It's a great trend. Actors and actresses singing shows that the craze for film music is growing by the day. Stars singing expands their claims to versatility. I am glad our film stars are following the pattern abroad were actors sing their own songs in musicals."


Alka Yagnik: "(tongue-in-cheek) Anything is possible these days. So I too have decided to get into acting now."


Anand Raj Anand: "As long as stars sing as a diversion and not as a rule it's okay. In Kaante I requested Sanju Baba to sing a song with an attitude 'Collar Ko Thodasa Upar Chadhake'. It was a hit."


Sunidhi Chauhan: "I think it's totally cool for actors to sing their own songs in films. Why shouldn't they, if they sound good?"