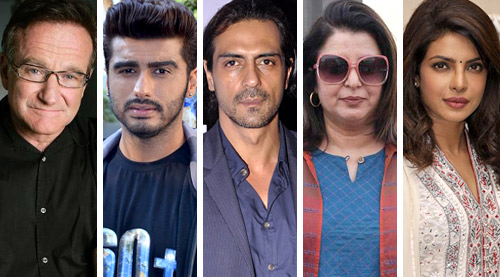 No one must have anticipated the sudden tragic end of the ace actor cum comedian Robin Williams, who allegedly committed suicide yesterday. As Robin's fans world over, including Hollywood celebs, are in an absolute state of shock, the situation in Bollywood is no different. While some of the Bollywood stars were too shocked to even say anything, others took to twitter to express their thoughts on Robin Willaims, who was best known for his memorable performances in films like Good Will Hunting, Hook, Aladdin, Mrs. Doubtfire, Jumanji, The Birdcage, Night at the Museum etcâ€¦ Here's what the Bollywood stars tweeted about Robin:


Arjun Kapoor: "RIP Robin Williams u will always remain in my memory as Mrs doubtfire...hope u find happiness up there u mad genius..."


Arjun Rampal: "Woke up to the awful and tragic news of Mr. Robbin Williams. He touched our hearts through so many wonderful characters. RIP captain o captain"


Farah Khan: "Oh god.. How do u tell Ur kids Mrs.Doubtfire has died!? RIP Robin Williams.. Thank u for the laughter n the movies!"


Abhishek Bachchan: "Oh captain, myâ€¦â€¦ terrible news about the passing of one of my favourite actors. Mr. Robin Williams. This is the 1st time he made anyone cry".


Shekhar Kapoor: "The man that brought us so much laughter and joy committed suicide? Who knows the internal conflicts of the creative mind #RIPRobinWilliam".


Sidharth Malhotra: "Sad to hear abt Robin Williams-RIP n thank you for all the laughs."


Boman Irani: "There will never be another Robin Williams."


Priyanka Chopra: "So disturbed since I heard of Robin Williams untimely demise. My childhood is peppered with his laughter. How hopeless must he have felt.RIP"