Last night, almost all of B-Town gathered under one roof to attend the Zee Cine Awards 2019. From Ranveer Singh and Deepika Padukone, to Ranbir Kapoor and Alia Bhatt’s PDA, to Vicky Kaushal looking handsome as ever, this night had it all. The stars put their best foot forward and by the looks of it, the inside pictures and videos show that the night was an absolute blast. From donning the best designer outfits, the performances were no less. We especially loved how excited the stars were to receive the trophies for their best performances. 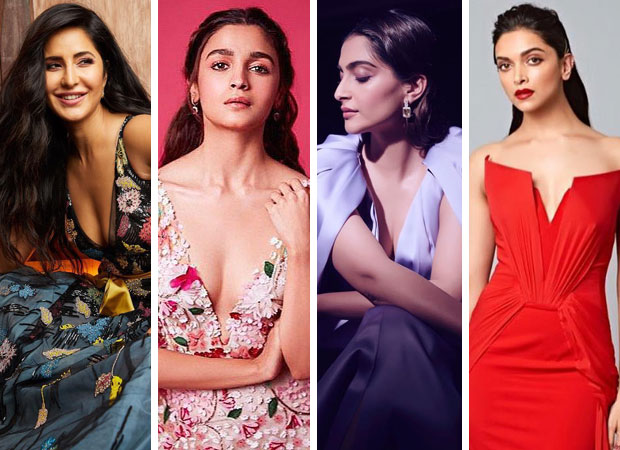 While the performances were stellar and the stars had a ball, we couldn’t stop ourselves from being star struck by their fashion game. The ladies were dressed in their western best while the men soared the temperature in their suits and ties. We, at Bollywood Hungama took the liberty of picking out some of the best looks from last night.

We all agreed when Deepika Padukone said on Koffee With Karan that she can pull of any look there is. She is literally the fashion queen of Bollywood and we can all count on her to look the classiest of them all. Dressed in a red Gaurav Gupta gown, Deepika Padukone sported gorgeous smokey eyes and red lips with her hair pinned at the back.

Vicky Kaushal sported an embellished tux and looked absolutely ravishing! His looks had the josh rising by the minute. He opted for Amit Aggarwal’s suit and a classy bowtie from the Tie Hub and shoes from Tresmode.

Katrina Kaif looked dreamy in a gorgeous Reem Acra blue and black gown with pastel colored floral print on it. She opted for beach waves for her hair, minimal makeup and small diamond earrings to complete her look. Honestly, the yellow belt on her dress has all of our hearts.

????On the Island, we do it Island Style, From the mountain to the ocean from the windward to the leeward side???? Outfit and Shoes - @Dior Assisted by @shradhapamnani @priyanka2.0 @ananyarao #VarunDhawan #ZeeCineAwards #Dior #DiorMen #JackJohnson #IslandStyle

Varun Dhawan sported a Dior suit which was apparently also worn by Jin from the K-Pop band, BTS. In all honesty, nobody but Dhawan Jr. could have carried that look with such poise. A sky-blue and cream coloured suit is always the way to go.

It takes the best director, best writers, best crew, best hair, best makeup, best every single person on set to eventually give you a " Best Actor"????Cause you are nothing without your tribe♥️This is for Team #Raazi, for @meghnagulzar & for all those unsung heroes who gave up their lives for the country. Thank you for all the love! #zeecineawards2019 wearing: @celiakritharioti

Alia Bhatt looked like a princess in her textured floral Celia Kritharoiti gown and is bringing the summer back with her ensemble. She totally reminded us of Te Fiti from Moana with her beach waves and minimal makeup.

Ranbir Kapoor donned a Tom Ford suit with a striped tie and it looked absolutely dapper in it. Perfect amount of gel in his hair with a light stubble, we almost wished he wasn’t dating Alia.

The young Bollywood diva, Janhvi Kapoor, is already considered as a fashionista with just one film. Her fashion sense is impeccable and she can carry various styles with utmost ease. For the Zee Cine Awards last night, she donned a beautiful crimson red Atelier Zuhra gown. She completed her look with gorgeous diamond studs and a sleek bun for the hair.

The heartthrob of the industry, Kartik Aaryan, has made a name for himself ever since his monologue in Pyaar Ka Punchnama. His recent hit Luka Chuppi performed really well at the box office and he even bagged an award for his role in Sonu Ke Titu Ki Sweety. Kartik was dressed in an Armani tuxedo with a pair of velvet finish black Jimmy Choo shoes.

Sonam Kapoor turns a lot of heads and grabs a lot of eyeballs with her classy fashionista streak. Her outfits are always better than before and her looks never fail to impress us. For last night, she opted for a gorgeous lilac coloured satin gown with a princess cut by Maison Yeya. We are absolutely in love with her look as she redefines the meaning of aesthetic.

Which look did you like the most? Be sure to let us know!