From suffering serious injuries to being advised bed rest, actors have continued to shoot under some serious health problems just because they are completely dedicated to the role. The situation was no different for Bhumi Pednekar. The actress has taken up one of the most unconventional projects in the form of Saand Ki Aankh, which also stars Taapsee Pannu. After undergoing some intense prep for the film, she recently started shooting for the film. However, the actress didn’t expect that the heavy prosthetics she has been using for the film to play a 60 year old will lead to trouble! 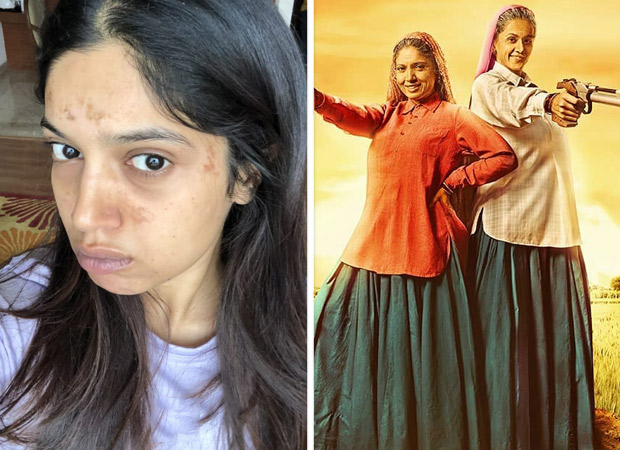 We recently came to know Bhumi Pednekar got some serious heat blisters on her face due to prosthetics while shooting for Saand Ki Aankh. Confirming the same, a member from the film’s crew said, “Bhumi plays the character of Chandro Tomar, who along with her sister Prakashi (played by Taapsee Pannu), are the oldest women sharpshooters of the world. Bhumi has to undergo 3 exhaustive hours of prosthetics to become Chandro every single day and then she is shooting for more than 8 hours in the sweltering heat of Uttar Pradesh. The heat and the dust and the long hours under the sun made prosthetics react differently on Bhumi and we noticed after shoot one day that her skin has been burning. Bhumi had not spoken about this at all and was continuing to shoot because she knew that we are on a tight schedule and the film needs to wrap. We were shocked and surprised seeing her dedication and commitment to ensure the filming process is smooth."

Bhumi had uploaded a picture of the burns on her face on social media and then quickly deleted it. However, we had managed to get all the details from a production insider.

The source confirmed saying, “The makeup on the film is very challenging, a mix of chemicals like latex and adhesive are used every day on the actors because they need to look like two old women on screen. We are also shooting in extreme temperatures because of which Bhumi landed up with burns on her face. It started as a small rash but eventually with the everyday application and removal of the makeup, it spread to her entire face and caused superficial burns! The actor known for her method and dedication still wanted to continue shoot so that the makers aren’t inconvenienced.”

When asked, Bhumi informed that she has addressed the burns and has consulted her dermatologist. “The only thing that I can do is use aloe-vera to cool down my skin and face. I can’t use any kind of medicated skin care products for this because I don’t want anything to react with my face further. As an artist, this film has creatively pushed me and satisfied me to the fullest and I’m proudly treating my burns as battle marks from a project that I have given my everything to,” she said.