We all know that the Karan Johar magnum opus Kalank released a day ago! The film boasts of a melodious album filled with peppy, classical and romantic tracks. Amidst that, Kriti Sanon was a part of the dance number ‘Aira Gaira’ which also featured Aditya Roy Kapur and Varun Dhawan. While she made only a special appearance in the film for this dance number, we hear that the actress underwent quite a bit of training to learn the nuances of the dance and she recently gave us a glimpse of the same. 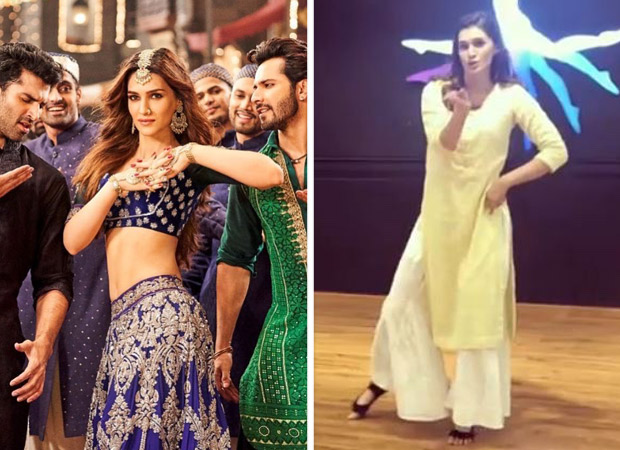 Kriti Sanon recently shared two posts on her Instagram page which were a part of her rehearsals for ‘Aira Gaira’. The actress also explained in the caption how much she enjoyed being a part of this Kalank track while posting these prep dance videos. Here’s a sneak peek into it:

I’ve lovveedd dancing even before I thought of becoming an actor.. #AiraGaira is definitely one of my favourite songs i’ve done so far.. Absolutely enjoyed rehearsing and shooting it!! ❤️❤️???????????????? Thank you for all the love flowing for #AiraGaira ! #PrepVideo1 #Kalank

The song 'Aira Gaira' has music composed by Pritam and the lyrics of the same is penned by Amitabh Bhattacharya. The song was sung by Antara Mitra, Javed Ali and Tushar Joshi.

Also Read: Kalank: Varun Dhawan says he will have ‘underwear’ as his political party’s symbol on The Kapil Sharma Show