Last Updated 28.11.2021 | 9:17 PM IST
feedback language
follow us on
Bollywood Hungama » News » Bollywood Features News » “In the batch of 600 engineering students, I was the only girl studying with 599 boys,”reveals Sudha Murthy on Kaun Banega Crorepati 11

Kaun Banega Crorepati, season 11, is in its last leg and has some surprises stored for the audience. Celebrating the power of knowledge, the show has not only provided a platform for contestants to win big sum of money but also brought forth some real-life heroes who work tirelessly for the betterment of the society. Sudha Murthy will be seen gracing the finale episode of KBC and will share the details of her philanthropy work. The season comes to a full circle with Mr. Bachchan bowing down to touch the feet of Sudha Murthy – an inspiration for many. 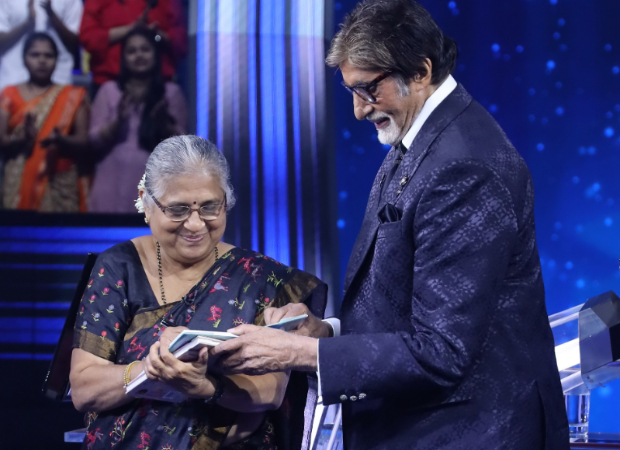 During their conversation on the show, Mr Bachchan addressed the fact that Sudhaji was the first-ever woman engineer from Hubli, yet she had to face a lot of flack for her choice of career. To which Sudhaji narrated the incident and how she tackled it all. She said – “In 1968 I set my mind on engineering. My father was a professor and a doctor and my mother was a teacher in a school before she got married. I figured I love applied sciences therefore I should pursue engineering. My grandmother was aghast! She said if you do pursue this, we won't be able to find a suitable match for you in our community. My father felt I will do good as a consulting doctor as my communication skills were good but my mother was banking on my mathematical skills and felt I should become a Mathematics professor so that I can manage a house also going forward – it won't be too taxing. So everyone had a perspective and advise to share on my educational journey. Some people even commented that a girl opting for engineering is unimaginable, this is field meant for boys, how can this be allowed, and many such other things. But I had made up my mind.”

Her ordeal didn't end here. She further added, “The college that I had applied to accommodated 600 students in total. And the batch that I was in had 599 boys and one girl which was me. The principal had to give me admission based on my marks. However, the admission came with a few clauses which were – I had to wear a saree through the course of engineering degree; I wasn’t supposed to go to the college canteen; I couldn’t talk to any boy in the college. The first clause wasn’t an issue for me and the second clause was the easiest – the canteen was so bad I anyway did not want to eat there. The third clause I strictly maintained for a year because after that the results came and since I was the rank holder, the boys started talking to me (laughs). But the most difficult part that I faced was that there was no girl's washroom in the entire college. Now I thought if I raise this, my only option will be to drop out of college since any way everyone was against my decision to pursue engineering. I said to myself that I will adjust. I used to walk 2kms to reach my college at 7 am and once the college got over at 11 am, I used to walk back 2kms and then use the restroom. In these years, what I truly understood is the importance of a hygienic toilet because without a toilet only a woman can understand what hardships she has to face. This actually led me to build 16,000 toilets across various states once I became the chairman of Infosys Foundation.”

Such passion and dedication towards education and serving the society has given Sudhaji names like Akka, Ajji, Amma which only means that she is a family member of the people she works with and works for.

Also Read: “We parents go through a lot of fear psychosis” – Emraan Hashmi opens up on son Ayaan’s battle with cancer