It has only been a week since Shah Rukh Khan finished shooting for his upcoming film, Zero. Helmed by Aanand L Rai, the film will narrate the story of a vertically challenged man played by SRK. The superstar returned from Orlando schedule this past weekend. Now, at the wrap-up celebrations, Anushka joined the cast and crew and enjoyed the completion of the film. 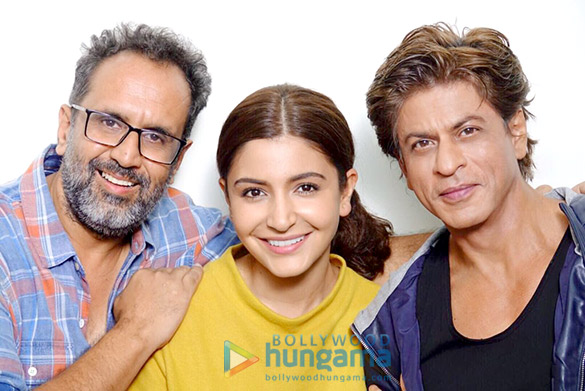 Anushka Sharma shared a picture with Shah Rukh Khan and Aanand L Rai and wrote about the beautiful journey she has had with the entire Zero team. Striking a pose together, she wrote, "Zero is all heart. Zero is these two wonderful people and everything they’ve endeavoured to create. Zero is me going on this journey with them. What a pleasure it has been. Big hug @aanandlrai and @iamsrk for your belief and to @katrinakaif for being the amaze one that she is! #ZeroWrap."

Katrina Kaif, who is also starring the film, was missing from the wrap up celebrations as she is currently on Dabangg Reloaded Tour. Anushka did mention her and called her amaze.

Zero is a story that celebrates life, the first look of the film featured Shah Rukh Khan as the adorable vertically challenged man piquing the interests of the audience to witness the unusual tale. The makers have gone on to mark the festivities, as they shared the first look of the movie this New Year. Red Chillies Entertainment and Colour Yellow Productions come together to bring ZERO, produced by Gauri Khan, starring Anushka Sharma, Katrina Kaif and Shah Rukh Khan, the Aanand L Rai directorial is all set to release on 21st December 2018.

Also Read: Legal notice sent to Anushka Sharma and Virat Kohli by Arhhan Singh who got scolded for littering